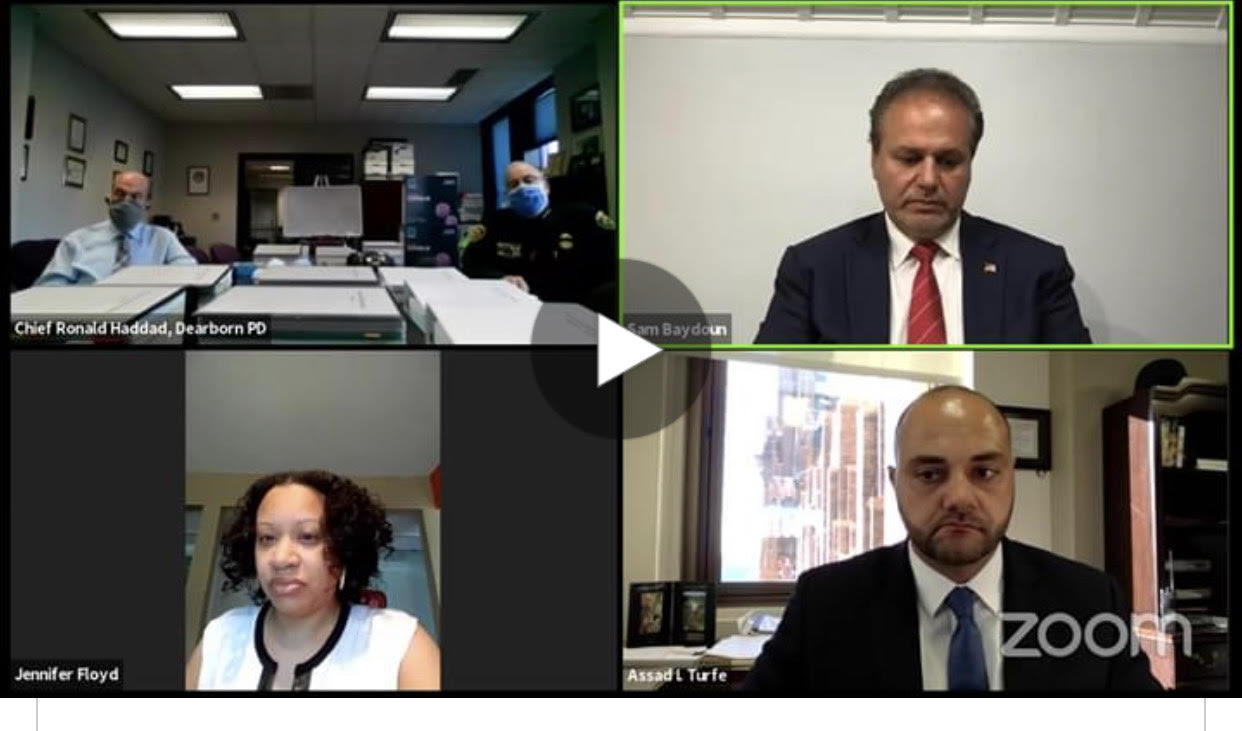 The most alarming moments from the meeting came when Jennifer Floyd from the Wayne County Health Department spoke about the rising numbers in Dearborn.

“The city of Dearborn only makes up 5.4% of Wayne County, but they are making up 23% of the COVID cases, so Dearborn is being disproportionately impacted,” said Floyd. “With all the cases in Dearborn, the most common age was 18.”

Floyd also said that the zip code 48126, one of the four zip codes in Dearborn, made up almost 50% of the local cases.

Baydoun, who acted as an emcee for the town hall, threw several softball questions to the Mayor who seemed confused and unable to provide basic details or identify the subject of what he was speaking on.

Many residents have been asking where the Mayor is, since the Mayor has not made any official speeches or major announcements, other than his COVID diagnosis, since March.

The Mayor has barely spoken at city council meetings in the last six months, with no commentary at all for most council meetings. O’Reilly has been known in the past for his raucus engagement with councilmembers and his vigorous defenses of city policy.

When Baydoun asked whether the city of Dearborn would be giving tax relief to impoverished residents, O’Reilly said, “Again, we try to be, uh – again, just as you said. We’re not just collecting for ourselves, we’re collecting for the thing. That’s not something we can, uh, just, void. So we can talk to them, and, uh, talk to the issue that they feel they can’t, uh – We’ll try to work with them. But we aren’t the ones – we can’t be – uh… we’re not the only ones.”

When Baydoun asked whether the city of Dearborn would continue issuing permits for block parties, O’Reilly said, “No. We do not and we will not. All they can do is drive-by’s – and we kind of – we don’t want them to – we don’t want that – we, uh… we’re not.”

At one point, when outlining why young people need to be more careful in their behavior, O’Reilly said, “What’s happening now is, in spite of everything that we did, the people who shouldn’t have been at risk have put themselves at risk because they’re enjoying certain things with their friends and they’re doing certain things and they’re not doing it in the way they’re supposed to.”

Later in the same talk O’Reilly said, “If, when they go out with friends and they get, they – they get, get some kind of problem, they go back to their friends, their families, they get something... We need these young people to rethink how they’re going about their lives.”

In recent weeks, retired police officer and former Dearborn city council candidate Kenneth Paris has accused the Mayor of being mentally impaired by some illness and suggested that the Mayor’s health was not up to snuff. Several prominent residents and community leaders, including teachers, local attorneys, and even non-profit leaders like Abdulhakem Alsadeh have raised questions about the Mayor’s absence during the crisis.

When it came to providing specifics, the Mayor frequently deferred to police chief Chief Haddad to talk about what the city was doing.

“Effective tomorrow, the Wayne County Sheriff’s office is going to be out and doing business checks on businesses in the city of Dearborn,” said Turfe. “These are compliance checks, making sure that people in this establishment are within the law and within the governor’s orders, to make sure everybody and all their customers are safe. Beginning tomorrow we’re going to have increased enforcement in the city of Dearborn.”

The crackdown comes amid the number of cases continuing to rise in Dearborn, even though the number of new COVID cases in Michigan declines.

“Tomorrow when we go out and do our increased compliance checks we’re going to go in and educate each business owner about what is allowed and not allowed,” said Turfe. “We gotta remember, this virus only survives and gets stronger if it infects another person. Restaurants and businesses gotta do their part. The last thing we want is for the economy to shut down again. We don’t want to get to the point where that’s the only option.”