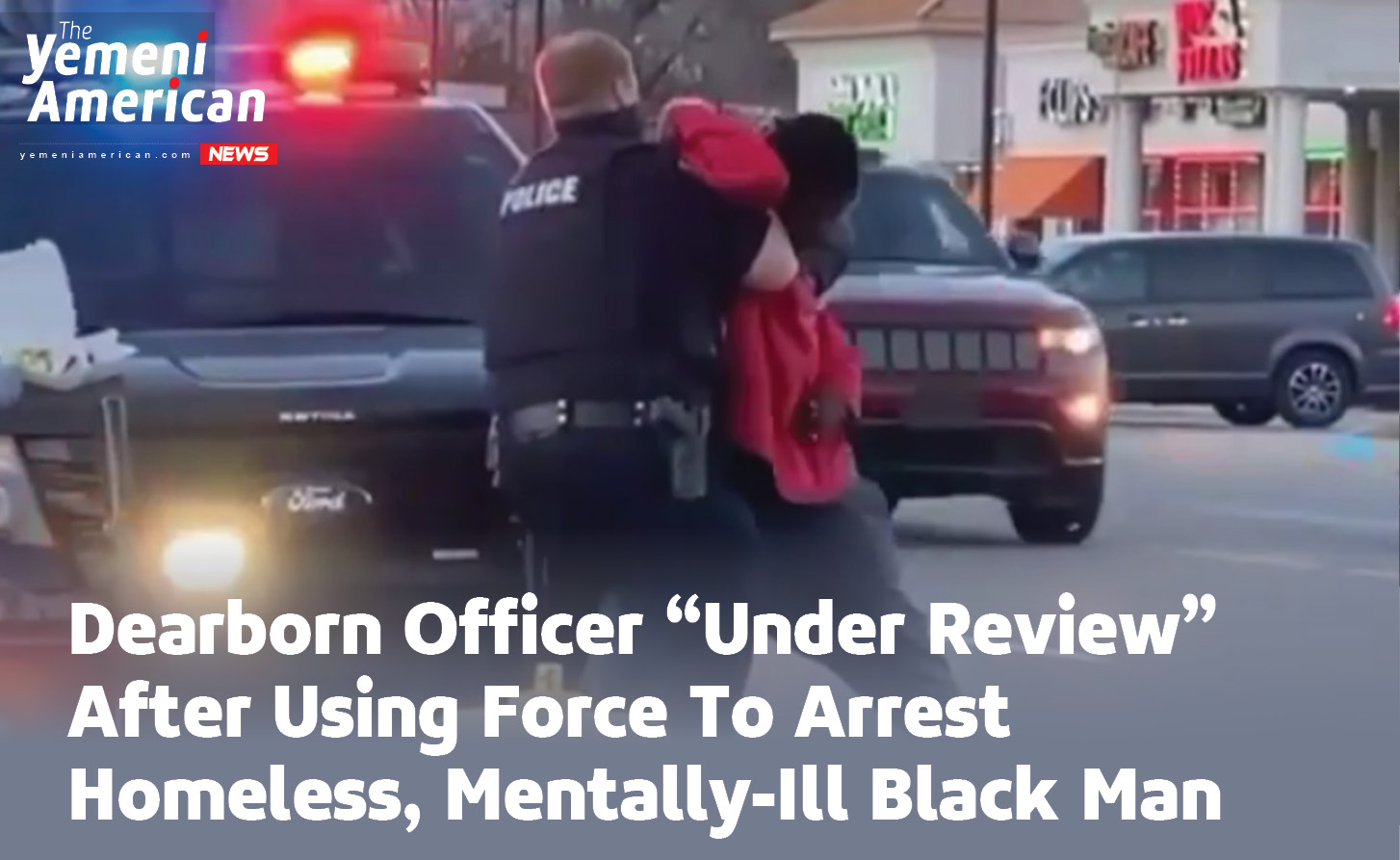 DEARBORN, Mich. — A Dearborn Police officer is under internal review for use of force after responding to a call yesterday about a mentally ill, homeless black man who was begging bystanders for help.

A video of the incident was originally posted by TCD and another site on Instagram, CrimeNewsInTheD, using the same accompanying text. A young man can be heard giggling as he records the violent incident. TCD later took down the video.

Moussa Dakroub, speaking on behalf of TCD, said, “We removed the video once we realized there was a laughing noise. Unfortunately, this was broadcast on other social media sites…  It’s not constructive, it was insensitive and it [does not] fit our community guidelines.”

The Yemeni American News has obtained a copy of the recording in case the one on CrimeNewsInTheD is taken down.

In the heavily-edited video with more than 52,000 views, an overweight, white Dearborn police officer is seen attempting to arrest a black man by grabbing his wrist. The man is tall, thin and wearing a red hoodie and red sneakers.  When the man recoils and tries to escape, the police officer wrestles him to the ground and almost falls over as the man resists and tries to flee.

A bystander then joined in to try and tackle the homeless man. Short clips of the heavily-edited video also show a group of bystanders holding the man down, and in the final brief clip a group of police officers are seen carrying him away into a police vehicle.

Because the video is heavily edited, it’s unclear what proceeded the arrest or in what sequence the events occurred. It’s also unclear whether the man, whom the police say has mental health problems, was able to understand commands given to him by the police.

Dearborn Police Chief Ronald Hadded confirmed the general details of the incident to the Yemeni American News, but said he wasn’t aware of any bystanders being involved. Haddad said that it is standard policy that any time a police officer uses force there’s a review of the conduct within 72 hours, and that includes reviewing body camera and other video footage that the Police Department has.

“The man in question was brought to the hospital for reasons of mental duress,” said Haddad.

Haddad said that the police officer was attacked, but if the department deems that the officer’s use of force was unwarranted, the review will be turned over to the internal investigation unit. The call to Dearborn police came from a resident who claimed the man was approaching cars and asking people for money, a description of something homeless people often do around Metro Detroit.

A local activist group, Accountability for Dearborn, put out a statement saying, “This event is an example of the criminalization and brutalization of Blackness, mental illness, and poverty in Dearborn. The officer involved must be terminated immediately. The City of Dearborn must establish non police emergency response teams. The City of Dearborn must establish comprehensive mental health and social services to provide support to the most vulnerated [sic] members of our communities.”

Members of Accountability for Dearborn have been asking for nearly a year for Dearborn’s City Council and Administration to get social workers or some form of non-police responders to be used in cases of homeless persons or the mentally ill.

The calls have largely fallen on deaf ears, with only a few councilmembers even responding to the group’s emails and regular comments at council meetings. At one point the city council President, Susan Dabaja, considered measures that would have silenced the group entirely, but backed off after media attention to the issue.

Alexandria Hughes, a member of the Accountability for Dearborn group, said she was particularly disappointed in the situation because she had been trying to find help for the homeless man. She’d heard about the individual about a week ago and was working with several groups to connect him to some form of help, because she was worried he’d end up eventually getting reported to, and arrested by, Dearborn police.

“I definitely feel like I saw this coming beforehand,” said Hughes. “I’ve been saying at council meetings, even the last one to [Police Chief Ronald] Haddad, that police don’t need to respond to situations that involve those who are mentally disabled or homeless.”

Hughes said that she feels Dearborn should respond to these situations using medical and mental health professionals, not police.

“In a way, it makes me feel powerless, like they don’t want a better solution. It makes me feel like they want this kind of harm to continue and that’s disappointing, because Dearborn can do better than that,” said Hughes.