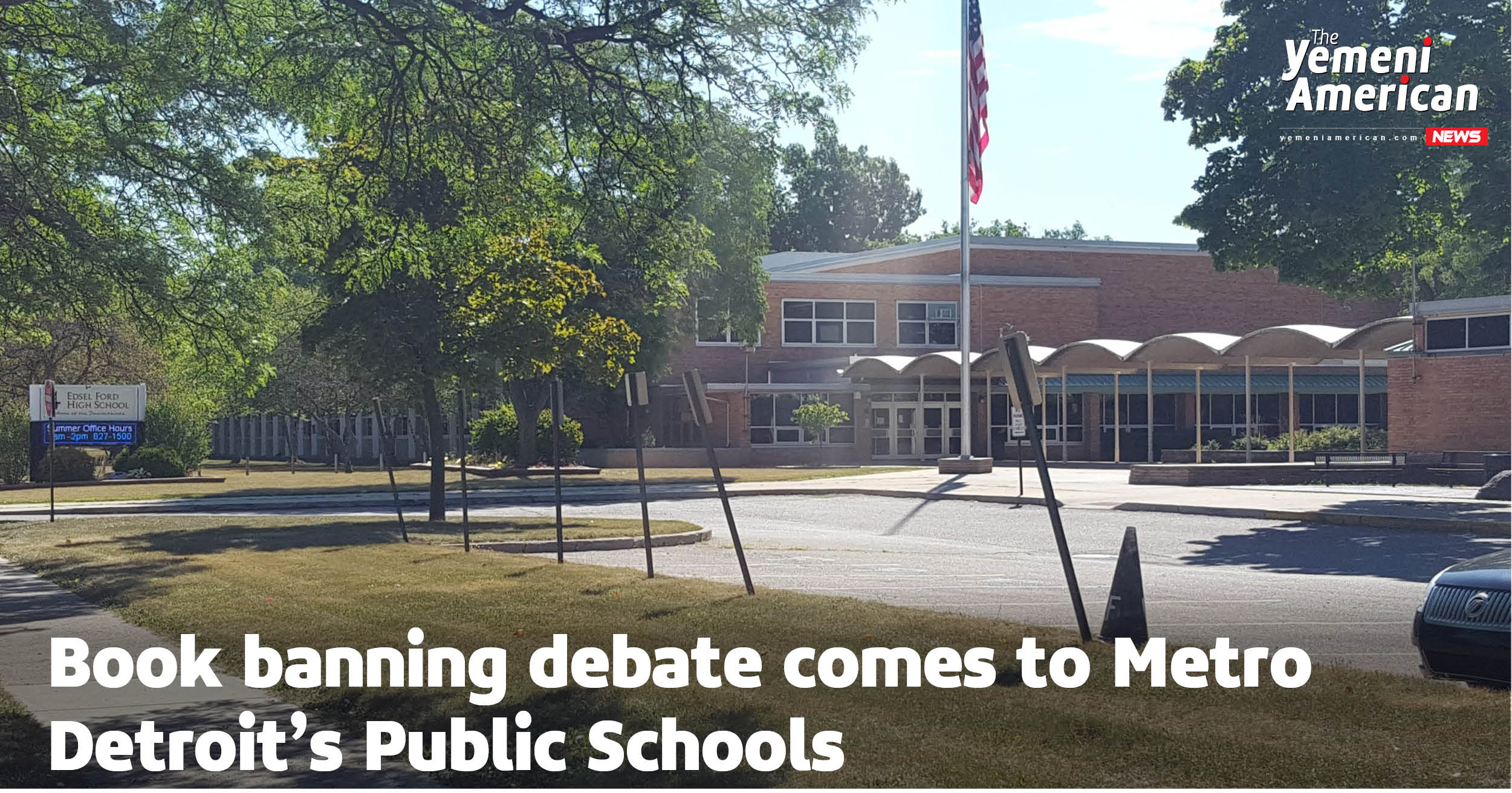 Dearborn, Mich. – On Sept. 25, hundreds of demonstrators gathered around Dearborn Centennial Library to protest what, in their view, were inappropriate books for high school students in Dearborn Public Schools.

Stephanie Butler, one of the organizers of the protest, has been going to Dearborn Board of Education meetings in an effort to protest what she sees is a misfocused school district. In a video posted to Facebook on Sept. 7, she talked about the social and emotional learning, saying that the school should focus on academics.

The video starts with her talking about four books she’s filed complaints about. But it soon takes a strange turn when she says she filed a police report against a book in the Edsel Ford High School library. The book itself, called This Book is Gay by Juno Dawson, is a guide for LGBT+ youth. It depicts illustrated guides to gay sex, among detailed health information for LGBT+ youth.

“I don’t believe that school is an appropriate place to learn about such graphic materials,” Butler said in the video. “I don’t believe that things should be hidden from parents anymore, which is why I decided to make this video, to let parents know what kind of things are taking place here.”

The Facebook video has been seen over 6,000 times and sparked a widespread public outcry against books that many people deem “pornographic.”

In response, the Dearborn Public Schools Board of Education has placed seven books under investigation, removing them from student access in the meantime. Those books are: Push by Sapphire; The Lovely Bones by Alice Sebold; Eleanor & Park by Rainbow Rowell; Red, White & Royal Blue by Kasey McQuiston; And They Lived by Steven Salvatore; All Boys Aren’t Blue by George M. Johnson and This Book is Gay by Juno Dawson.

The majority of the books on this list grapple with issues unique to LGBT+ youth. Many are stories about being in love for the first time. Others, like This Book is Gay are oftentimes called indispensable information for LGBT+ Youth. The others deal with women’s issues in the worst form that they can take, including the reality of gender violence against young women.

Paul Bruce is a former teacher for Edsel Ford High School. He has been a vocal critic of Butler’s advocacy. In a statement, he derides Butler’s approach to the issue, saying that if someone doesn’t want to read about it, then they shouldn’t deprive it from someone who does. Bruce also accuses Butler of pushing what he sees as the parent’s responsibility onto the school board.

Bruce’s main point in a Facebook post was that this deprives LGBT+ students from learning about themselves at best, while it may actually be demonizing LGBT+ students in front of parents like Butler.

“The students who fall into the LGBTQ+ population have been further demonized, maligned and vilified by both the perpetrator [Butler] and the School Board,” Bruce said. “In removing books about them, you have made it clear that THEIR books are cause for concern. That they might somehow tatter the moral fiber of the students who read them and that, indeed the LGBTQ+ students themselves are somehow part of that moral decline themselves.

“That is both unfair and despicable. Don’t bother trying to tell me that is not your intent. Your intent here is irrelevant because the negative light that has been thrust upon both the students and the situation clearly says otherwise.”

Mayor of Dearborn Abdullah Hammoud has released a statement in response to the protests. In his statement, he sees the situation as not about protecting children, but about limiting freedoms of expression and access to information.

“Nationally, we have witnessed attempts to restrict access to information and literary works. But make no mistake; at their core, these are attempts to limit our freedom and it will not stop there,” said Mayor Hammoud. “The same ideology that once considered people like me “a problem” in Dearborn is now being revived under the guise of preserving “liberty.””

Needless to say, the response to his statement has been mixed, with many applauding what they see as a clear-headed response to the political cause of book-banning entering Dearborn’s schools. Others who are in support of banning the LGBT+ books had other things to say.

In the end, Mayor Hammoud cannot direct the school district on its practices. However, he made a promise to not remove any books from the city’s libraries.

“As mayor, it is my responsibility to ensure our children have the tools to create their own future,” Hammoud said. “Our libraries serve as a gateway to knowledge, a gateway to imagination, and a gateway to possibility. When it comes to our city’s libraries, for the sake of our children, no book will be removed off the shelves.”

As a small aside, the Yemeni American News looked at a few select books in Dearborn Public Schools. One such book, Mein Kampf – which is Adolf Hitler’s manifesto that advocates for a fascist society in which racial minorities are subjugated – remains not only unchallenged by Butler, but also currently checked out by a student of Dearborn Public Schools as of Sept. 29.

Want to talk further about the books, or book banning? Reach out to our reporter, Simon Albaugh at simonalbaugh@gmail.com