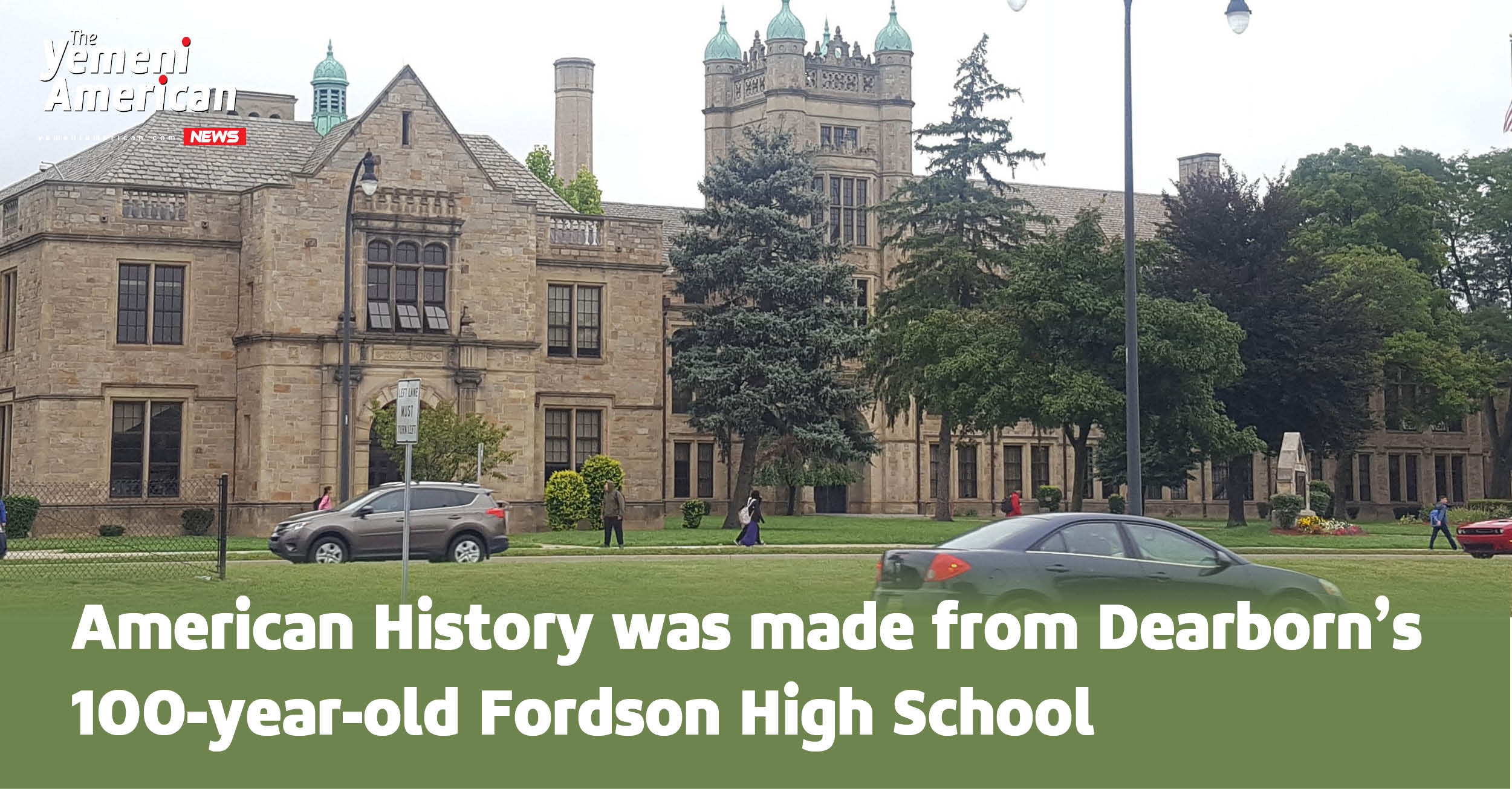 Dearborn, Mich. – Within the halls of Dearborn’s Fordson High School, the history of the United States is complexly interconnected with every student who passes through its classrooms. This can be seen since before the building, when Fordson’s $2.5 million construction price tag was funded by Henry Ford himself. The Arsenal of Democracy couldn’t be what it was without its unique architecture. And some of the most important cultural, and countercultural institutions have been improved because of former Fordson students.

With Fordson High School’s 100-year anniversary being celebrated this month, the Yemeni American News is taking a look back at the history that has affected and been effected by the community of students who have passed through that illustrious history.

Built in 1926, but established in 1922, Fordson High School took its name from the community that used to be East Dearborn. Their mascot, the Tractors, were a sign of the time when Ford Motor Company began mass producing tractors under the Fordson name.

The Fordson Tractors has been home for 11 sports stars, including world champion boxer Charles McCoy and the current head coach of the New York Jets, Robert Saleh. Saleh, who’s only the fourth Arab American to be head coach in NFL history, is also the first Muslim head coach in the League.

With many of the best and brightest in America passing through the school, there are also those who brought the country down further away from an American dream. Former Dearborn Mayor Orville Hubbard, ardent anti-Arab politician and hard-line segregationist, graduated from Fordson High School.

Hubbard is remembered as a controversial figure. While orchestrating anti-black segregationist policies in an effort to “keep Dearborn clean,” Hubbard is also remembered by some as a politician dedicated to the people who were allowed to be his constituency. However, Hubbard’s legacy as a symbol of Northern suburbs’ refusal to racially integrate still remains.

During WWII, an ex-con from Dearborn, Michigan was sent to the front lines near Normandy, France. Eddie Slovik was having a difficult time after his run-ins with the law, and after his most recent parole for stealing and crashing a car while drunk, worked for a plumbing company in the city. In the 1940s, Slovik was first declared morally unfit to serve in the military, but was redeclared fit and drafted on Jan. 3, 1944 to fight in Europe.

Upon carrying out his threat, Slovik was sentenced to execution by firing squad, the last time an American soldier was executed for desertion since the American Civil War.

Slovik’s is a famous story of a Fordson graduate who’s military career ended in infamy. Before being executed, Slovik accused the military that sentenced him to making an example out of him, seemingly because he was the only ex-con to be drafted and carrying out desertion.

The Fordson High School building itself was also used during WWII when spotters would use its tower to keep watch for any enemy aircraft that would’ve attacked the Ford Rouge Plant, which was manufacturing tanks for allied forces throughout much of the 1940s.

Fordson High School has touched and been touched by the history of the past 100 years. Throughout this time, its former students have both driven the brightest of the country’s history, and been witness and victim to some of its darkest moments.

That history is still being written every day with the students who are driven on the school’s courts and fields, and dedicated in its laboratories and classrooms.