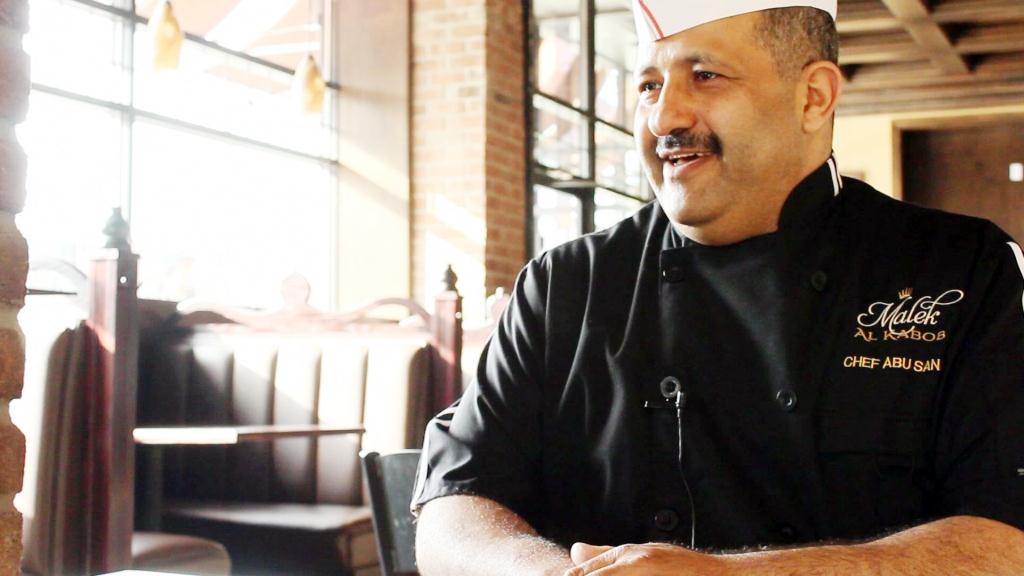 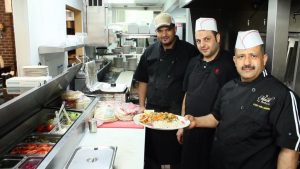 Abu Sinan with his staff

Mohammed Hassan, also known as Abu Sinan, started his career in the United States as a busboy cleaning tables and washing dishes in an Arab restaurant in Dearborn – bussing is one of the jobs practiced by many immigrants to the United States, at least initially, considering that when they arrive they lack the educational qualifications and linguistic skills. What distinguishes the story of Abu Sinan is that he developed his business and culinary skills and became one of the most famous Mediterranean chefs in Michigan.  As his career has developed he has also become an owner and partner of a chain of restaurants in the state.

Abu Sinan, who immigrated to America in 1989, said that immediately after his arrival he began to work as a busboy at La Shish restaurant which, at that time, had an excellent reputation in Michigan. Through his inadvertent contact with the chefs at La Shish, Abu Sinan started gradually learning to cook himself by helping the cooks cope with last minute orders; which they did not have time to prepare immediately.

Abu Sinan continued to work at La Shish for three years before becoming an independent cook.  There was one incident seemed to elevate him to the next level.  Abu Sinan recalled one night a customer entered the restaurant and ordered Tomato Kibbeh (a dish made primarily of tomato, bulgur and spices). The chefs on duty were too busy to prepare the complex dish in a timely manner. So, Abu Sinan took the initiative to make the dish, his first formal dish in a restaurant setting. He anxiously anticipated the customer’s feedback. A few minutes later, the waitress returned to the kitchen to ask who prepared the Tomato Kibbeh: all chefs denied their involvement expecting the worst. To his and everyone else’s surprise, the feedback was extremely positive: the customers were so impressed with the dish that they gave $10 tip and expressed how delicious the dish was!

As for the start of his business career as a restaurant chain owner and manager, Abu Sinan said that he began a business partnership with Abu Fahd Obeid, founding and launching Royal Kebab Restaurant in Taylor, Michigan.  This venture quickly achieved tangible success and made him think about expansion. He then opened another restaurant in Hamtramck, Michigan, Malek Al-Kebab (King of the Kebabs Restaurant).

Most recently, Abu Sinan entered into a partnership at La Palma Restaurant with Dr. Mohammed Sahobah located in flourishing midtown Detroit. Now preparations are in full swing to open a new restaurant in Dearborn, Michigan.  Abu Sinan intends to stylize this new restaurant in a unique way, featuring blends of Arab, Mediterranean and Yemeni cuisine, making it the first restaurant to serve such dishes under one roof in the city.

It seems that the success of the Abu Sinan did not come out of the blue. The man has a strong work ethic, respects people and others he works with, appreciating their efforts. He does not hesitate to help others, especially new immigrants who are unable to find jobs easily.

Abdo Al-Ashwal expressed his gratitude to Abu Sinan for helping him get a temporary job without even being acquainted with him.  Mojeeb, a college student, works at La Palma emphasizing that Abu Sinan is someone of a special high quality, he respects everyone and is successful in all aspects of his business.  Abu Sinan treats everyone as a friend and thus is highly respected by his employees as well.

Abu Sinan is grateful to everyone who helped him and stood by him, especially his employees and business partners, stressing that he and his partners see themselves as one big family, one of the secrets to the success they have achieved together.