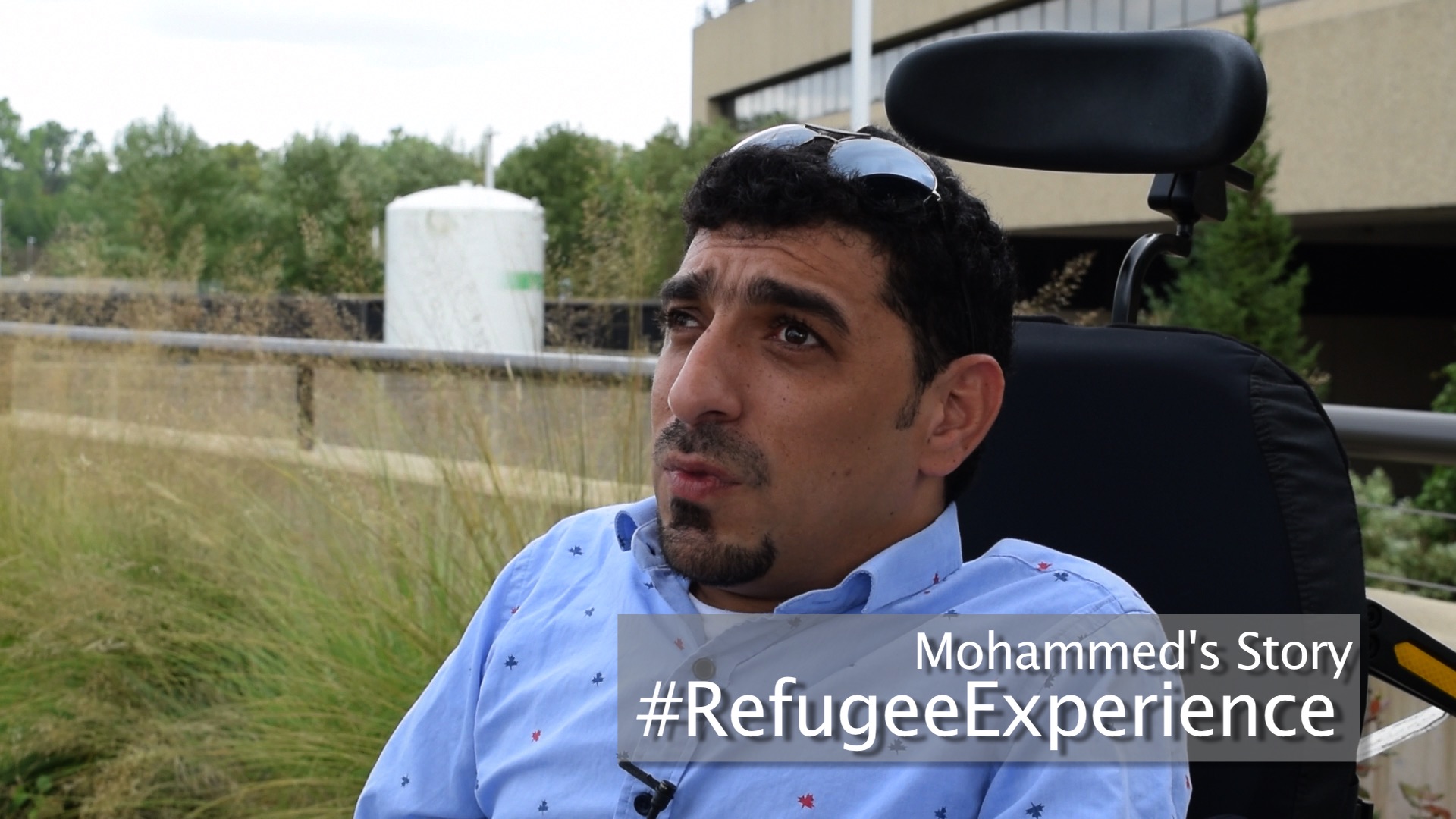 When I met Mohamed Baij from war torn Syria, I drove down to Toledo to visit my good friend Shane Lakatos who has been serving the Arab community there for many years along with his wife Lona.  They created an organization called Social Services for the Arab Community (SSFAC) to serve people, beyond any label, simply because they are people.

On that particular day Shane was taking Mohamed for a doctors appointment at the University of Toledo Medical Center.  Mohamed has endured many challenges in his life, compounded by his physical disability due to polio that requires him to use a wheelchair.

The social worker that day asked Mohamed many questions, was thoroughly helpful and at the end of the discussion asked if there was anything else she could do for Mohamed? He hesitated, not sure what to say and then teared up.  He then said, “Thank You very much.” And went on to tell the social worker how he had never been treated so kindly or felt valued as a person, but on this day it was different.

We had to wait for his next appointment to have a wheelchair adjustment so we went outside, had a coffee and I had a few moments to ask Mohamed about his experience as a refugee from Syria.  Here are some of the things he had to say (translated from Arabic)… 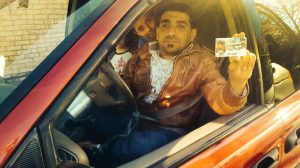 “We left Syria for Jordan. In Syria, when the air strikes, bombings and rockets began, I didn’t find anyone to help me get out of my house.  My wife picked me up. She took me from our home to the street. I slept a night on the street. Then I went to Sham and then to Daraa. In Daraa, some people told me that they would take me to Jordan. I said, ‘OK!’  They took us in the evening by cars resembling those used to transport sheep. They threw me out on a desert street with my wife and children. We asked them: ‘Where is the person who is supposed to take me?’ They said: “They’re coming within half an hour.” They left me in the desert till 3:30 a.m. without even a light.

Another convoy came. They used to take people to Jordan across the borders. A Palestinian man was there. He was neither with the Free Army nor with the others. God bless him, he came and carried me 7 kilometers until we crossed the border and came to Jordan. In Jordan, I stayed in the Zaatari camp for 4 days. The situation in Zaatari was very bad. I mean, I didn’t eat meals for 4 whole days, because I wasn’t able to go to the bathroom.

Then, I got out of Zaatari. Someone, God bless him, took me under his wing and took me out. Then, the immigration department called me to see my documents in order to go to America. And, I got to America. Thank God! What can I say?!

The situation in America, God sent me people who were ‘Better than my people’: I mean it sincerely! Honestly and sincerely! As to the organizations in the US, first of all, they put me in an organization in Dayton Ohio.  They put me in a house full of cockroaches, a dirty house. I told them, ‘I can’t stay in this house.’ They told me, ‘We require you to stay in this house.’ I told them, ‘Syria and Jordan disgusted me.’

Syria disgusted me due to the war. And Jordan disgusted me. It’s in America where one can find human rights. It’s in America where one can feel valued with dignity. I lived in Syria 31 years without being valued. I wasn’t recognized due to my health situation.  I wasn’t recognized in Syria. I mean, if I got into a public office, they would kick me out. They wouldn’t welcome me. Even in malls, they didn’t welcome me because I couldn’t walk and needed to be picked up and carried everywhere I go. I came to America because it’s here where one can find human rights. I told her, ‘I’m asking for human rights.’ She told me, ‘human rights require me to stay in this house.’ I told her, ‘Then I’ll stay on the street.’ She said, ‘If you stay on the street, the police will take you and put you in a shelter.’ I asked her, ‘Is it really like this in America? Would they put me in a shelter?’ She said, ‘Yes, I’ll put you in a shelter.’ I told them, ‘Return me to Bashar Al-Assad’s rockets.’

It turns out that there would be more mercy. They sent me a woman named Rania, God bless her. This woman heard about my story and talked to a man named Shane. He is with the SSFAC in Toldeo, and they have coordinated to bring me from Dayton to Toledo. What can I say? My tongue is unable to describe how thankful I am for what they have done for me. I don’t feel handicapped when he picks me up and down and places me where I want to go, while he is grateful and happy.

I had friends who if one of them picked me up once or twice, the third time he wouldn’t say hi to me, so he wouldn’t pick me up, I have been here for two and a half months almost three, he always picked up and put me down, and he didn’t leave me. Shane made me feel like he is better than my family and friends. His wife Lona, also is more kindhearted than Shane, praise the Lord.”

After Mohamed told his most difficult story I asked him what can the media do to help in this current crisis of war, killing and refugees fleeing for their very lives, he responded,

“First of all, we have never known real journalism before coming to America because we didn’t have journalism in Syria; it was forbidden. The second thing is, the press is everything, it’s what delivers the human voice worldwide. It’s what expresses people’s problems more than a doctor could, even more than the patient himself could, the press is the best one to show people’s sickness, their circumstances, the situations they are living in. The situations we are living in are very bad, worse than what all of history has lived before us, and no one is listening to us, and the people who do hear us pretend like they don’t, maybe by God’s and the press’ hands our voice would reach people, and we touch people’s feelings. I wish to send a message to the Syrians themselves, I want them to love each other, that’s it, whether in alienation or in Syria. I want them to love each other, because what happened to us was our fault. It’s not Bashar’s fault, or even the fault of The Free Army. I hope they love each other, stand together, feel for each other. Just that, it’s not good when they are selfish. I spent four years in Jordan. The way we are dealing with each other is worse than before.

When we come to America, it’s much worse, so what is the reason? Does our religion tell us to do that? Our religion is faith of good relationships; our God who sent us to earth and gave us our religion said that your religion is a religion of good treatment with each other. He didn’t say “praying” or “fasting” or “worshiping”, he said “good treatment”. I just wish for the Syrians, if they want their country to be fixed they need to fix themselves, starting with me, and so on. That’s it.”

Mohamed’s story continues, since I met him, the SSFAC does not ask for anything in return for their heartfelt services to the community but do encourage those that have benefited, once they get resettled, to become contributing members of the community by now assisting others with transportation needs! This is exactly what Mohammed has determined to do himself.  He has learned to drive, and through assistance from the SSFAC and others he has a vehicle to drive and has a sincere heart to provide rides and transportation for others in Toledo as new arrivals to America. The SSFAC continues to love and assist and in fact does not touch refugee’s stipends in anyway and in fact ensures it back to the family for their own use to start their new lives here in the United States. Please take a few minutes to watch and share his story featured in the #RefugeeExperience project: http://www.sabeelmedia.org/refugeeexperience

The challenge Mohamed laid before us is real, we need to love each other starting with ourselves. That’s it!