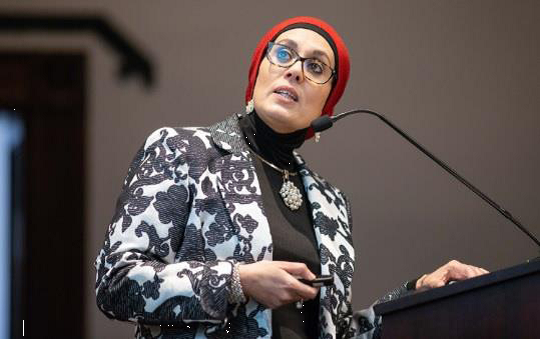 The Arab American National Museum (AANM) will host its 5th Annual 9/11 Anniversary Town Hall event at 8 p.m. Friday, Sept. 13 in an exploration of how institutions and communities of color have been infiltrated and their leaders targeted in the name of security as well as the impact of this issue on the community. The event will take place at AANM (13624 Michigan Ave, Dearborn, MI 48126) and will feature storytelling from local community members and a keynote address by Yemeni American schoolteacher, community activist and founding principal of New York’s Khalil Gibran International Academy, Dr. Debbie Almontaser.

Leading While Muslim: The Experiences of American Muslim Principals After 9/11.

“I spent the days after September 11 building bridges among students in New York City,” said Dr. Almontaser. “I started a school designed to foster multicultural education, teach Arabic and embrace diversity. Our America is not about fear and ignorance, it is about acceptance.”
Dr. Almontaser is an internationally recognized, award-winning educator, speaker and authority on cross cultural understanding. In addition to her twenty-five years as a veteran of the NYC Public School System, she is the Board President of Muslim Community Network NY and frequently lectures, serves on panels and facilitates teacher and public workshops on cultural diversity, conflict resolution, Arab Culture, Islam, Muslims in America, interfaith coalition building and youth leadership at schools, among many other topics.
Local storytellers were invited to submit stories of real-life experiences to be told during the event, with winning writers being coached in one-on-one sessions by 2017 Kresge Literary Arts Fellow and producer, curator and host of The Secret Society of Twisted Storytellers, Satori Shakoor. Storytellers featured during the event are Dearborn Heights resident and activist, Rashid Baydoun, and Board Chairman of the Arab American Civil Rights League and VP of Multicultural Marketing/Managing Director Middle East of Bassett & Bassett, Nasser Beydoun.
Following the storytelling will be a talkback featuring Dr. Almontaser as well as Dr. Sally Howell (Director of the Center for Arab American Studies at the University of Michigan-Dearborn) and Petra Alsoofy (Outreach and Partnerships Manager of the Institute for Social Policy and Understanding).

Dr. Almontaser will also be doing a signing of her book, Leading While Muslim: The Experiences of American Muslim Principals After 9/11, with proceeds going to the humanitarian crisis in Yemen.

“My hope for anyone picking up this book is to form solidarity for American Muslim principals in public education,” Dr. Almontaser said. “They are working in silos because of their identities. They face discrimination, they face microaggressions and they don’t really have a support network. I would love this book to fall into the hands of a superintendent, or an administrator at a district, or the state education secretary in every state to see that there is importance in providing these leaders with support and understanding because of who they are as Muslims.”

AANM’s 5th Annual 9/11 Anniversary Town Hall: The Targeting of Institutions is presented in partnership with The Secret Society of Twisted Storytellers, TAKE ON HATE, the University of Michigan-Dearborn’s Center for Arab American Studies and the Institute for Social Policy and Understanding. This event is made possible in part by the Michigan Council for Arts and Cultural Affairs, National Endowment for the Arts, Comerica and the Nissan Foundation.

Ticket Information
Tickets for 9/11 Anniversary Town Hall: The Targeting of Institutions are $10 for Museum Members, $12 for Students & Seniors and $15 for General Tickets. To purchase tickets or for more information, visit bit.ly/911TH2019