Adnan Jumman:  His War Story From the Drawing Room  to the Cafeteria 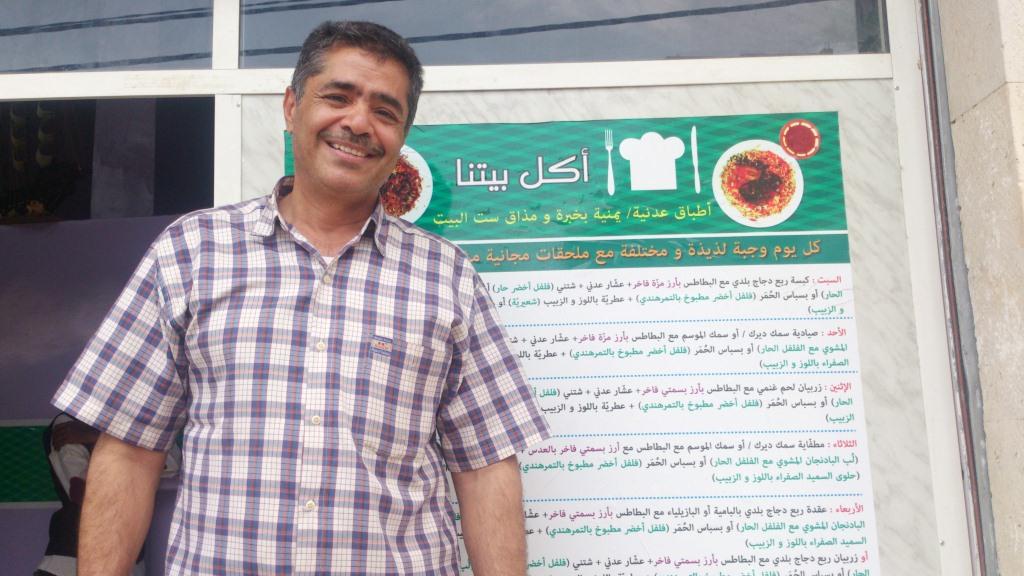 The name, Home Food, is not just the name of a small cafeteria in Sana’a.  Home Food is the Yemeni tale of a an artist and his wife.  Both of these struggling Yemenis engaged in a battle for a life of dignity against poverty.  After the government salaries ceased coming and living conditions became more challenging due to the ongoing war in Yemen now for nearly 2 ½ years, it was essential for this man and his wife to seek a new livelihood in order to save their family.  Thus they had to find a new way of providing for their family to earn an honest living.  So they pursued the course of earning a living the hard way, which took them from the drawing room, where the husband used to earn his living, to the kitchen of the artist’s wife.   Thus a new cafeteria was born.

Soon brought hardships on everyone in the country, as it takes the lives of many Yemenis and constrains after the launching of this new enterprise, became a shining beacon of light amidst the tragedy unfolding in Yemen as a result of the dreaded war, which has their capacities.

The War in Yemen has caused the fatality of over 10,000 Yemeni civilians, most of whom are women and children, as well as the destruction of most of the functioning capacity of the infrastructure, bringing with it the risk of hunger and the spread of diseases and illnesses, highlighted by severe malnutrition, cholera, which in its second wave has brought on the death of nearly 2,000 victims and has afflicted nearly half a million Yemenis throughout Yemen up to now.  These tragic indicators have never been experienced by any country in the world in this century.  The numbers of suffering citizens of Yemen have caused international rights organizations to raise their voices lately and they have declared Yemen to be the severest tragedy facing the world today.   Despite all these frightening signs, international centers of effective decision making remain untouched by the cries of suffering Yemenis or by witnessing the bloodshed in the poorest country of the Middle East.

Adnan Jumman – perhaps one of two cartoonists known in Yemen – has spent four decades with his pens and paint brushes and colors.  He never thought that  the day would ever come that he would ever have to abandon his drawing boards and word with his wife in a new vocation such as food catering to secure the sustenance needs of his family.  After all this is a stage in the history of Yemen where all means of livelihood have become impaired by the ongoing was in his country, which is now tied up in a regional conflict on its own turf and by its own local combatants.

The war has closed all avenues for earning a living by the product of his drawing boards and his artistic skills, as a fine artist and a master of graphics, and the needs of life unattainable, as is the case of all his fellow Yemenis to the point of being even unable to meet the rents due on his accommodation and the costs of other essentials of life for his family.  Adnan needed to move on to a new and honest  vocation that will save his family from privation.  He finally settled on beginning an enterprise which centered on his wife cooking  a daily meal in his own kitchen, as his wife was a well known culinary artist, especially cooking  Adenese food.  Adnan went to work on his project with care and diligence and overcame all his fears and apprehensions.  He was innovative in the promotion of his project by setting up a facebook page in his former timeline named after his project, which he called “Home Food”.  The name had  implications:

First, the food implied home cooked meals with the cleanliness of a family home kitchen, and it also implied a unique taste and flavor associated with food from Aden.  That is how Adnan described his novel enterprise.

The enterprise adopted a whole different system.  The cafeteria had a weekly schedule, which  was published electronically, of the foods served during the week, with each day having a different meal, and showing the price and details of the meals.  Anyone who wishes to be served the meal of the day can just call to state the meal he wants and by Noon can come to pick up his/her order accordingly from Adnan’s home.

When the project was launched, initial costs did not exceed $200, which he borrowed to buy utensils and other needs.  Maybe the cost of raw materials for the first day’s scheduled meal.

The project was a success from the first day.   As demand increased with the passage of time, the space in his kitchen was inadequate to meet increased demand.  He had to expand to a new small cafeteria outside his home.  This entailed additional capital and start-up costs and thus Adnan faced problem of securing financing for the new expansion outside his home.  He said that he was able to overcome the funding problem by borrowing from one of his friends who lent him YR 1 million.  Thus Adnan successfully launched his Home Meal Enterprise to a new small restaurant, with a ground floor premises in a building in a street branching out of Hadda Street.

The one meal a day regime was not compatible to restaurants usually serving a variety of meals.  Then he had the problem of having to compete with a large number of high class restaurants all around his humble catering enterprise. He crossed his fingers and was ready to take on all these challenges.

Two months after having launched his expansion project Y-A came to visit Adnan after his new enterprise settled into a success as well.  Adnan had now regained his former smile  after overcoming all the  challenges.

Adnan says that this is due to the cleanliness of his restaurant and the fine Adeni food cooked by his wife, who now had two women helping her to prepare the daily set meal.  His job was to provide for all the needs of the kitchen and supervise the service  to the customers in the eating hall assisted by an assistant.

Notwithstanding the hard work, Adnan and his wife are happy at the end of the day with the proceeds generated by their enterprise.