Immigrants contribute about 11 percent of the county’s total GDP

Yemeni migrants, as a workforce, are the top contributors to wayne’s economy by 14%

– I was not surprised by the figures of study. Those who are surprised who those who stand against immigrants

– There is more work to do

– If immigrants do not exist, business will not be here, but elsewhere 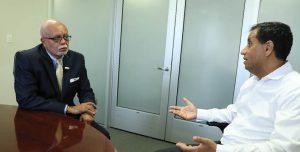 The Yemeni American News editor sat down with Mr. Warren Evans, Executive of Wayne County for an interview on the state of the Wayne County. Mr. Evans said that when he was elected to office, many folks were asking him when will the county declare bankruptcy.

The county executive says “the county is in a much better state right now. We have done many things to reduce the county’s overall debt. We not only had balanced budgets for the past 4 years; but we’ve had them with surplesses. We also have a rainy fund of close to a $150Million.”

Evan believes the economic stability is just one part of the story. “That’s one aspect of the recovery is that we started reaching out to residents and became responsive to their needs.” he said

A recent study said that the New American Economy along with Wayne United performed a study and found that immigrants have played a major role in reviving the county. The report displays the small businesses these new immigrants start and the power of consuming goods over $3 Billion in Southeast Michigan alone. Mr. Evans believe immigrants are a major contributor to the comeback of the county and Southeast Michigan. “Almost 25% of our talented workforce are non U.S. born. The study that says Yemeni Americans make up the largest immigrant community when it comes to the labor force does not surprise me.”

Mr. Evans tells that the Yemeni American News that he’s still not satisfied and sees great potential for the county to be more responsive and inclusive. He said he’s not surprised to read the outcome of the study as he believes that immigrants who usually are entrepreneurs and small business owners are contributing heavily to the economy of the county.

On the roads issues, Mr. Evans sees it mainly as a State funding issue. “We’re the oldest county with major needs for roads and infrastructure. Two bridges alone need about $100 million to be repaired.

When asked about the Miller bridge, Mr. Evans said there are more roads that need more help than Miller. However, he still believes this is a state issue. Mr. Evans believe the challenges are many ahead and that funding from the State will continue to be an issue.

On whether the county is still looking to have a professional soccer team, Mr. Evans said he recognizes the importance of the sport; he said to stay tuned for “major news” on this issue.