The Vanity of War 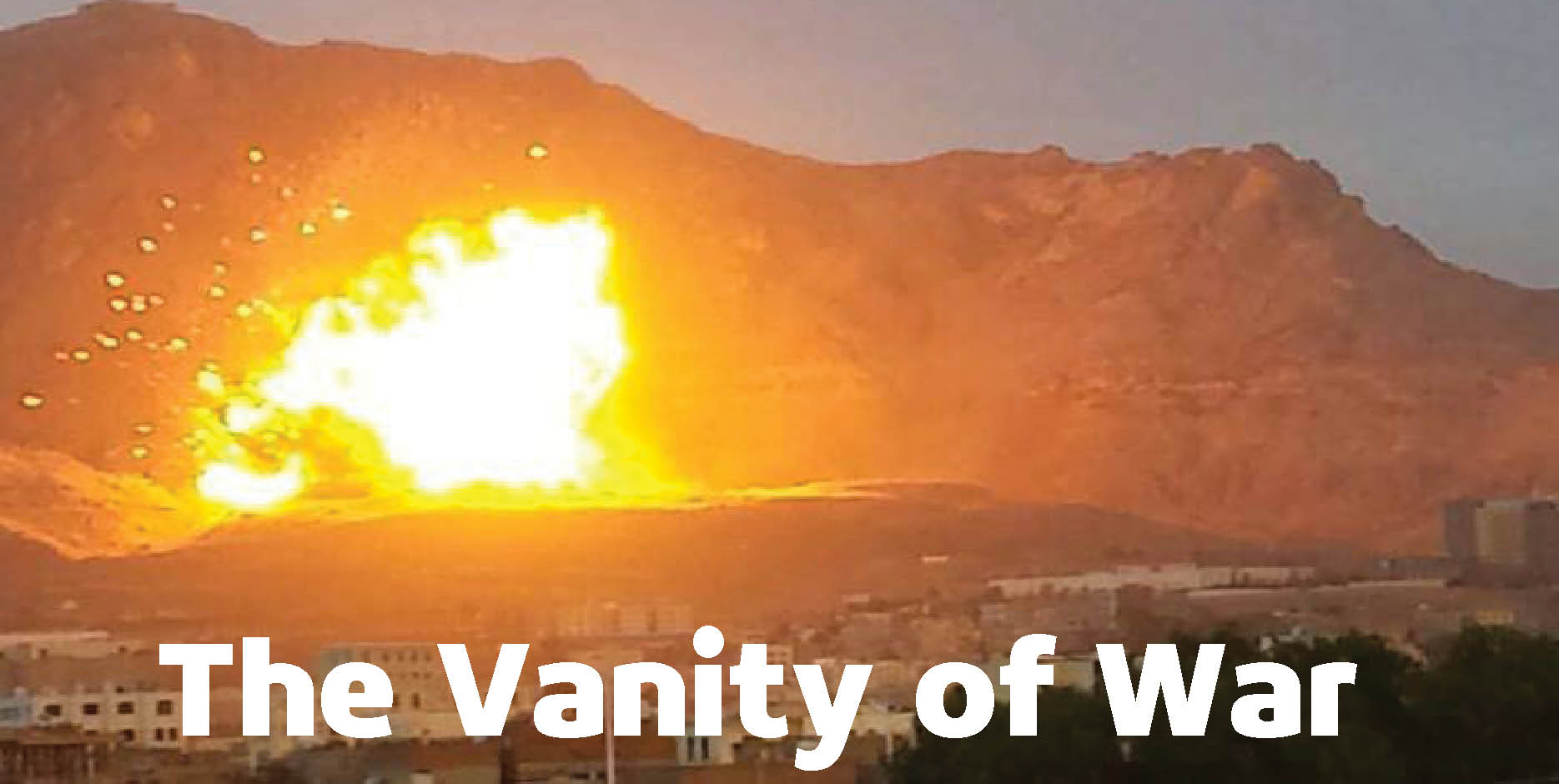 I never lost hope of winning Ashjan’s heart, so I kept searching for some excuse to meet her away from formal occasions. However, it seemed that fate worked its way to arrange for an unexpected event.

It happened that the head of accounts in our plant, who reached his oldest age, took a trip to his birthplace to meet his final hour in life in an explosion of a booby trapped car. I was promoted to replace him in this job and started to think that this promotion offered a good pretext to invite my co-workers to dinner. Inside the bus that is used to ferry the plant’s employees to and from the plant, I stood in the front to invite everyone, including the bus driver, to a tea drinking party in David Hotel and then to a Kebab dinner in a neighborhood in the old city of Sana’a. This was planned to take place in the evening of the next day.

Cheering oring cries of joy and approval went through the bus. Even girls did not hide their pleasure. As anticipated in such occasions, no one was surprised at my invitation, the reason being that when someone would celebrate a happy event, it was quite the customary thing to throw a feast, called in our local tongue “Wakirah”.

The bus driver with his light beard turned down the idea to change his usual itinerary and adamantly apologized for not accepting my invitation, saying that he does not like to waste his time in merrymaking and nonsensical doings! So I turned to Rahma, the head woman who served as some sort of females’ representative, and arranged with her the transport for girls. Giving her the money for this transport without hinting at my real intention, she whispered and winked mischievously at me, implying that she got it and would bring Ashjan along.

The following day I took care to be in the place before anyone else. David Hotel was originally an ancient, multistory house which had been restored and renovated but kept its time-honored architectural design that is typically characteristic of houses in the old city of Sana’a. This hotel has become one of these charming antiques, a real masterpiece the eyes never tire of looking at! Attached to it is a spacious courtyard with an extremely genial café that can accommodate as many as forty guests. The courtyard also overlooks an open space through which the lofty buildings of Old Sana’a can be seen along with a green orchards the sight of which penetrates the soul with joy and comfort.

My colleagues started to drop in dribs and drabs; there were twenty two of us. We arranged the tables next to each other and sat in one group, sipping tea, coffee and Qisher (Yemeni coffee drink made of husks) and all the time exchanging stories and talks. I got friendly congratulations and blessings for the promotion from all, including from Ashjan, her eyes shining with happiness and thrill. How could that be otherwise when deep inside she knew that she was the star of the event and that I was doing all this only to win over hear heart. After her natural disposition, she was unreserved and started humming some sweet tunes and swaying along with them. She also took to teasing Rahma by pulling off her headscarf, all the time throwing hilarious jokes and anecdotes to all the laughing and pleased gathering. All at once, my darling’s funny, charming and life-loving propensity revealed her true self which can easily spread joy and delight among all those around her.

Meanwhile, I tried to restrain myself from stealing looks at her but to no avail, so I gave in to staring at her friendly and smiling face and made myself oblivious to all the gossips that might be said by envious backbiters. Little did such scandalmongers know how infatuated I was with her!

It was about half an hour before the call to the sunset prayer that we started to hear disturbing sounds of powerful explosions coming from the direction of Nuqum mountain which bordered Sana’a in the east. We were not so worried because targeting Nuqum with airstrikes, day and night, had become so much of a routine occurrence that it had almost become part of the daily ‘entertaining’ episodes for the people of the city.

We saw the hotel owner, an obese, light-skinned old man, on the roof watching the mountain as it was being hammered repeatedly by rockets. We saw him talking with Nuqum as if it was a person. It seemed to me that in doing that, the man was communicating thoughts and feelings on behalf of all of the people of Sana’a. Speaking in that sweet local dialect used by the people of Old Sana’a which appears at face value to be extremely polite but hides scathing sarcasm, the hotel owner succeeded in holding our attention and in evoking smiles.

In a flash of a second, our sights were captured by a gigantic orange ball hovering over heads form the east. A terrifying, deafening and thunder- like explosion was heard immediately after. The ferocity of the blast threw us all on the ground. Tea cups and glasses, chairs and tables were scattered all over the place and the very ground beneath us felt as if it turned over our heads.

Not long before, a wave of cries and screams were heard in all parts of the plagued city. Countless number of throats sent cries of panic and fears among them ours which involuntarily issued loud cries of panic. We got up on our feet in total confusion and started to grope the way in search for some hideouts and refuge. Each and every one of our group thought the rocket had fallen on some place at the end of our hotel. For me, it was the first time ever that I witnessed this state of disbelief and confusion and the indescribable horror of approaching death. Women were wailing and men shouting incoherent cries. The hearts of the scared people seemed to beat quick and fast and no one was able to maintain self-control and tranquilly.

We saw the fat owner of the hotel coming down, his entire body shivering and profusely sweating. He came towards us and said that he just saw some angles coming out from underground, three or four of them have beaks and they were carrying at the height of their shoulders a hunchbacked lumber by which they worked to push the fire away from houses adjacent to Nuqum. He further asserted that he saw the flames of fire receding backward. We made him drink some water and tried to assuage his panic. We could not exactly figure out what was wrong with him but perhaps the powerful blast scattered his brain and he became possessed by strange visual hallucinations. His teeth were chattering altogether out of extreme panic. He kept mumbling words we could not understand. He tried to be articulate but his tongue became heavy before he lost consciousness.

This scene we just saw about the ferocious power of modern men to inflict havoc and destruction would be engraved in our memories, never to be forgotten. We saw a lightning rod of fire, smoke and shrapnel flying up in the sky. The head of this flaming rod was wide and swollen and looked like the upper tip of the male penis. Its body grew bigger and bigger. It was a scene of flagrant sexual abuse.

I saw Ashjan beating her way towards me. Yelling in anger at my face, her hijab dropped off her hair, the eyeliner dripped down her cheeks, she cried “you have brought me to the jaws of the lion!” I said nothing in response, aware that she had lost her senses and was woe-stricken because of what she just witnessed.
We came out of the café and split. Many of us left without saying good bye, each one running in great turbulence and anxiety over the safety of their dear and near ones.

In one minute, the smoke mass was turned into a black cloud that sealed off the light of the sky. Utter darkness encircled the eastern part of the city. The sky started to rain ashes over our heads. It was fragile and charred morsels. We wondered what that could be! In a blink of an eye, people took to spread that this scattered dust flying form the site of explosion was contaminated with radiation! What happened next was something that reminds you of dooms day: thousands of men, women and children took quickly to the streets to flee from the eastern neighborhoods of the city towards the western parts where the sun was still sending rays and the sky above was clear, its serenity undisturbed.

This was something like what we hear about the Day of Judgment. Only it was compressed in a tiny capsule of one hour time!

All transportation means were engaged. There were some people who were willing to pay unimaginable amounts of money to any taxi driver for taking them and their families to safe places. I saw one of them offering five hundred US Dollars for a trip that in normal cases wouldn’t cost him more than five dollars!

I decided with my colleagues who stayed to accompany our female colleagues the walk back to their homes. We moved under depressing, heart-breaking grey light, while the crushed pieces of rocks pouring heavily on us, their burnt smell filling our lungs. Of course we were not alone. Countless number of terrorized people were fleeing in all directions. We came across them in every curve and street, running in determined and quick strides in escape from this creepy monster that was loosening a bleak mantle over our city with no break or mercy.

By midnight, the overcrowded ‘al Sid’ neighborhood lying at the bottom of Nuqum Mountain was completely deserted. Most of the residents in nearby areas moved out in mass displacement, seeking refuge in the farthest corners of the city.

News started to circulate reporting that the senseless demon that hit Nuqum was a neutron bomb, the shock of its explosion was felt over a radius of ten kilometers. Reports also said that the strike ended the life of 120 people and injured 400 others. More than twenty thousand houses and buildings sustained various damages as a result of the ferocious blast.

We passed a restless night, haunted with ghostly nightmares. With the first day light I went out to see Nuqum thinking that perhaps it has cracked or changed form. But I saw the mountain firmly rooted in its spot, majestically standing like a dignified matron. Times cannot penetrate or change it. To me, Nuqum appeared to be grinning in utter contempt at the folly of all that was going on!