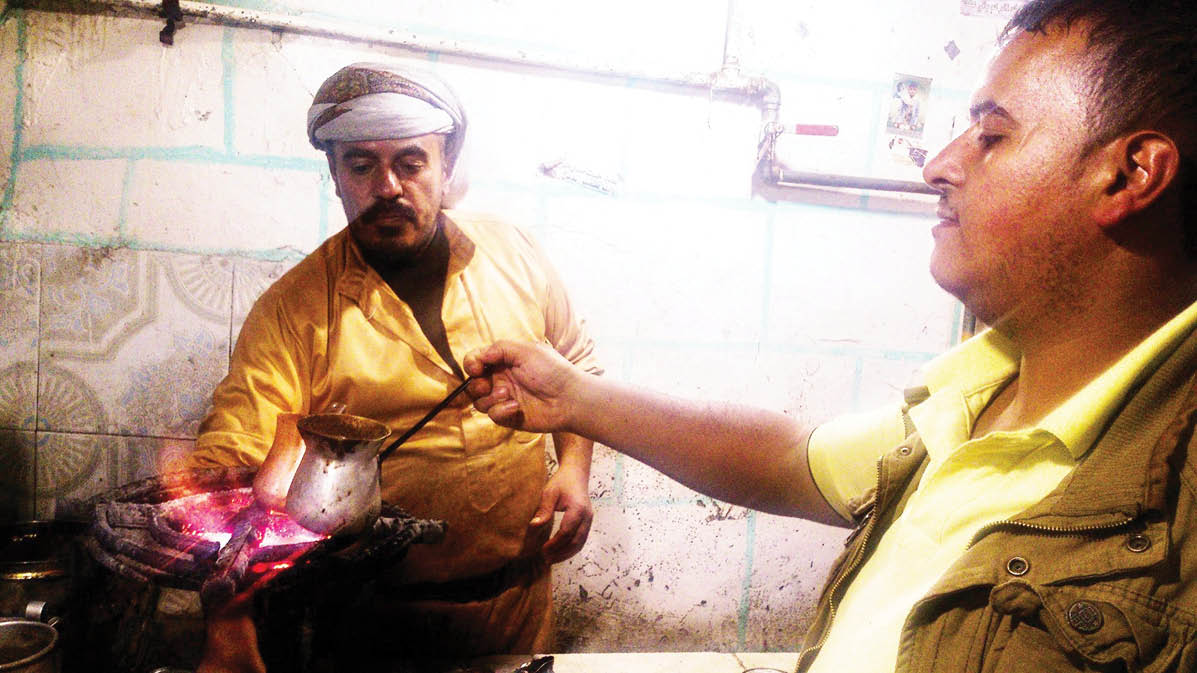 Mohammed travels 40 km. by car from the periphery of South Sana’a to the Bab Al-Yaman gate in the heart of the City on the Southern East edge of the Old City of Sana’a.  He parks his car and walks in the Suk Al-Milh area, wherein he buys bread brandished with sesame seeds.  Then he walks on to the Warda’s Caravansary (old style inn.  There, in the “Narguila Market” he takes a seat in the café, which is crowded already from 5 AM.

As he enters the Caravansary, he greets, points and signals to the kids of “ Warda”, standing behind the counter making tea.  They, turn, do not forget to turn to him answering his greeting as he enters.  He orders nothing, because they already what he wants, boiled coffee (a Yemeni way of preparing coffee in the open top Arabic coffee maker called the “Jazwah”.  Mohammed was treated as a regular customer at the Caravansary and the staff knew how to deal with their customers well.

The entrance of the old inn takes you to a passage which leads to the foyer of the café.  The hall of the Café was filled with marble topped tables and wooden chairs, which is also split into a newly set up “Families”  section to cater to increasing number of ladies that come to the caravansary.

Mohammed spends over YR 1,000.  The Caravansary has become a popular drop-in to several regular clientele, who enjoy the traditional means of relaxing coffee and raucous aura, which give the Café its special traditional atmosphere.  Many customers of the café come from distant locations for the perky aroma of the café and the boisterous clientele.

Caravansaries are well known inns from way back when, in the Old City of Sana’a, but there are conflicting accounts as to their origin and date of construction.  They were originally meant to cater to arriving caravans of merchandise or travelers, who come to Sana’a to deliver their goods or pass on to other towns of Yemen northward, southward or eastward, westward.  They serve as stables for tired camels and temporary accommodations for their passengers or “guides”.

Samsarat Warda is the most popular of these and located in the Old Suk Al-Milh of the Old City of Sana’a.  Samsarat Warda is used by many residents of the city to mean any crowded house or hall.

Samsarat Warda is the most popular of these caravansaries and has been modernized with modern decoration and comfortable seats and utensils to accommodate its ever growing clientele, even in these times of war.

Samsarat Warda is probably around two to three centuries.  The recent relatives of Warda themselves could not determine when the “Inn” was set up.

How did the name of Samsarat Warda came about?  Taha, a member of the owning family, states that the name goes back to one of his grandfathers, who lived during the Ottoman rule of Yemen.  This grandfather used to serve a high net worth family  in Sana’a.  This family had a very beautiful maid or female servant by the name of Warda. His ancestor was enchanted with Warda and he referred to her as the Head of the Household after their marriage.  Thus her name became the Family name for his own household and they became as the Warda Clan.  When they bought the Caravansary, it took on the name as well and the name of Warda still lives on as the name of the Inn and the family.

The Caravansary continued to operate in the period of Imamic rule and changed its service line and looks after the September 26, 1962 Revolution as modes of travel and accommodations changed to vehicles and modern hotels and inns.  The inn took on more the role of a café, where people wished for a nice brew of individually prepared tea or coffee.  Thus Samsarat Warda continued to provide a source of livelihood to its owners, with the customers who before were sitting on the outside pavement or sidewalks.  Taha explains:  “We were serving tea and coffee to the customers on the outside street and pavement.  As customers increased, we opened a small hall in the interior of the Samsarah and we furnished it with marble tables and wooden chairs and also set up a “Families” section to accommodate to women and their families.  As the business grew we set up two branches in the City also with the same name of ‘Samsarat Warda’.”

As with everything else in Yemen, of course the current war had an impact on most businesses and obviously affected the livelihoods and ways of life of the people, as the level of poverty increased and people trying to eke out a living in hard times.  Taha says: “Yes the war affected their café service, but not so severely.  Samsarat Warda continued to serve as a respite for people to find relief in hard times.  The affects of the war may be more visible in the looks of the faces of the customers, showing the gravity of the fears brought on by the war and the unstable conditions people have to live through.  Taha exclaims that one cannot avoid noticing the sullen looks of people caught in a situation with an unpredictable future and with widespread suffering evident throughout Yemen.”

As for the business in the Café, Taha notes that the Café has regained some of its heretofore declining business: “As more people now come to the Café”.

It should be borne in mind that the location of the Café in the Old City gives the Café its specialty, and add to its attractiveness to many customers, who relish escaping to the charms of the Old City.

Asked about its customers, Taha notes that most are down to earth simple folks, professional, sports players and aspiring youth, not to mention the old famous customers, who have their own tables and even cups to be served on.

Warda’s Caravansary is a special place with its “Yemeni flavor” as many of its visitors state, where Yemen’s identity is clearly manifested in the history, architectural style and the warmth of the people, who remain optimistic and dynamic in their outlook and hopes, notwithstanding the visible agony and stress in their faces.