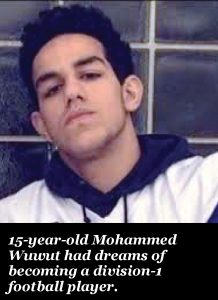 Mohammed Wutwut, a 15-year-old Dearborn native, passed away on July 8th after drowning in Cass Lake in Waterford.

Wutwut was going into his sophomore year at Dearborn Star International Academy. Family and friends of Wutwut would tell you that if there’s one thing he really did love, it was the game of football.

Standing at 6’1, Wutwut started for Star’s varsity football team as a freshman.

According to Coach Margo, Wutwut had hopes to being a division 1-college football player.

When we asked what kind of person Wutwut was, coach Margo said, “Mohamed was a great kid, who was friends with everyone. He was a hard worker who loved football. I will remember him most for being a kind-hearted person, who wanted to help people and get better at football. He was always looking to work harder and get better.”

Dearborn Star had a 7-on-7 scheduled a few days after the passing of Mohammed Wutwut. Coach Margo was going to cancel the 7-on-7 because he felt that it was too soon to play football after such a huge tragedy. Then he realized that he could use the game of football to honor and remember his fallen star.

“The 7on7 for our school was a great step forward in our program and to help us move on with Mohamed Wutwut as a different part of our team,” Coach Margo said. “Instead of him helping carrying us on the field, we will carry him in our hearts this year. “

One of the teams that were in attendance at the 7-on-7 was University Prep Science and Math (UPSM).

“It was great how the teams interacted,” said Kumasi. “The competiveness was there but with a feel of comradely as well. At the end all the teams came together and gave a moment of silence in respect for Wutwut and the Star program in its time of need. “

Coach Kumasi later added that the 7-on7 was, “exactly what all these small programs needed. As a matter of fact, in honor of Wutwut we will play that 7-7 every summer in his name hosted by Star. Coach Nick Mango from Star came up with that wonderful idea.”

Coach Margo ended the interview by saying these strong words: “Overall, we preach family and working hard for each other, and above more than most Wutwut was that person, so it was very key for us to come together and grieve and move on together as a team and as a family”.