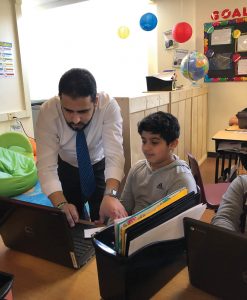 Nabil Nagi chose to pursue a career in education after seeing a “critical shortage” of Yemeni educators in the region. Now he is the principal of Tau Beta, a K-8 school in Hamtramck that opened last year.

His goal, he said, is to ensure that all students meet their full academic potential by encouraging their ambitions.
“I aim to be a change agent in collaboration with the District leadership to inspire and motivate students and families to go beyond high school,” Nagi said.
One of the ways he works to raise the standards is by engaging parents.
Hamtramck is home to a growing Yemeni community and a district that is trying to accommodate a large number of incoming students whose native language is not English.
“Events and opportunities to educate our wonderful parents is key in student achievement. Continual communication between the school and parents is critical as well and we strive to continue to do so,” Nagi said.
“The school and district invite parents for ways to help their children at home while also hosting adult English language acquisition classes at Tau Beta. We want all our students to be the brightest and best, with aspirations of doing great things in the present and future.”

‘Receptive and excited’
In turn, parents are comfortable in communicating with the school, Nagi said, describing them as “receptive and excited” about the partnership.
“Tau Beta is a new school and I am working hard to create a foundation for literacy, character development, and cater to the need of all stakeholders,” he said.
Nagi added that one of his crucial tasks is hiring the best educators who value diversity.
“In order to achieve success, one of the duties as principal was to hire the best candidates in different teaching and administrative positions,” he said.
“A strong team that understands the cultural dynamics and educational needs of students is critical, while appreciating the value of having different cultures. These candidates went through Hamtramck Public Schools new multi-layered hiring process.”
Nagi has high hopes for the school, which stem from his belief that all students are entitled to the best education possible.
“I wake up every day with an ambition to make Tau Beta school a top tier school within a relatively short time by continually reminding myself and my team of our mission to ensure that every student has access to the very best of everything in education and remaining to be state-of-the-art for years to come,” he said.
The school deals with each student individually to address the young scholars’ needs.
“We are already a ‘one to one’ school with a laptop for every student and all grades. Also, a goal of always having the best curriculums and educational tools to give our students an advantage edge over the rest I the state and nation,” Nagi said.

Working hard
Nagi said one of the challenges the school is facing is transitioning students to the new setting, which he called a “good problem to have”.
“The School is attracting a lot of students and families, but the capacity does not allow. I wish I could enroll every student who applies to Tau Beta or interested families and accommodate them,” he said. “The school has reached its capacity and partly because there are many students leaving Charter Schools in the region and is their neighborhood school living in close proximity.”
Nagi added that he is trying to establish a foundation to support everyone involved in the school, including staff, students and parents.
“None of this I could not do without the support of the Board of Education and most importantly my mentor and supervisor [superintendent] Thomas Niczay.
For his part, Niczay said Hamtramck Public Schools is fortunate to have Nagi.
“Tau Beta is a kindergarten through eighth grade school with a large Yemeni population,” Niczay told YAN in a statement. “Mr. Nagi is Yemeni and Tau Beta families are very happy to have someone of the same ethnicity as the school’s leader.”
The superintendent also lauded the principal’s work, pointing to the atmosphere of respect that Nagi helped create.
“He is working hard nurturing students, guiding the staff and helping the community grow. As Superintendent I’m proud to have him on my team,” Niczay said.
“Tau Beta is a new school and Mr. Nagi is establishing a respectful learning climate while also making it a place for students to grow academically and emotionally at their own pace.”