OPINION: Yemenis Around the World can Continue to Support Yemen’s Football Champions. 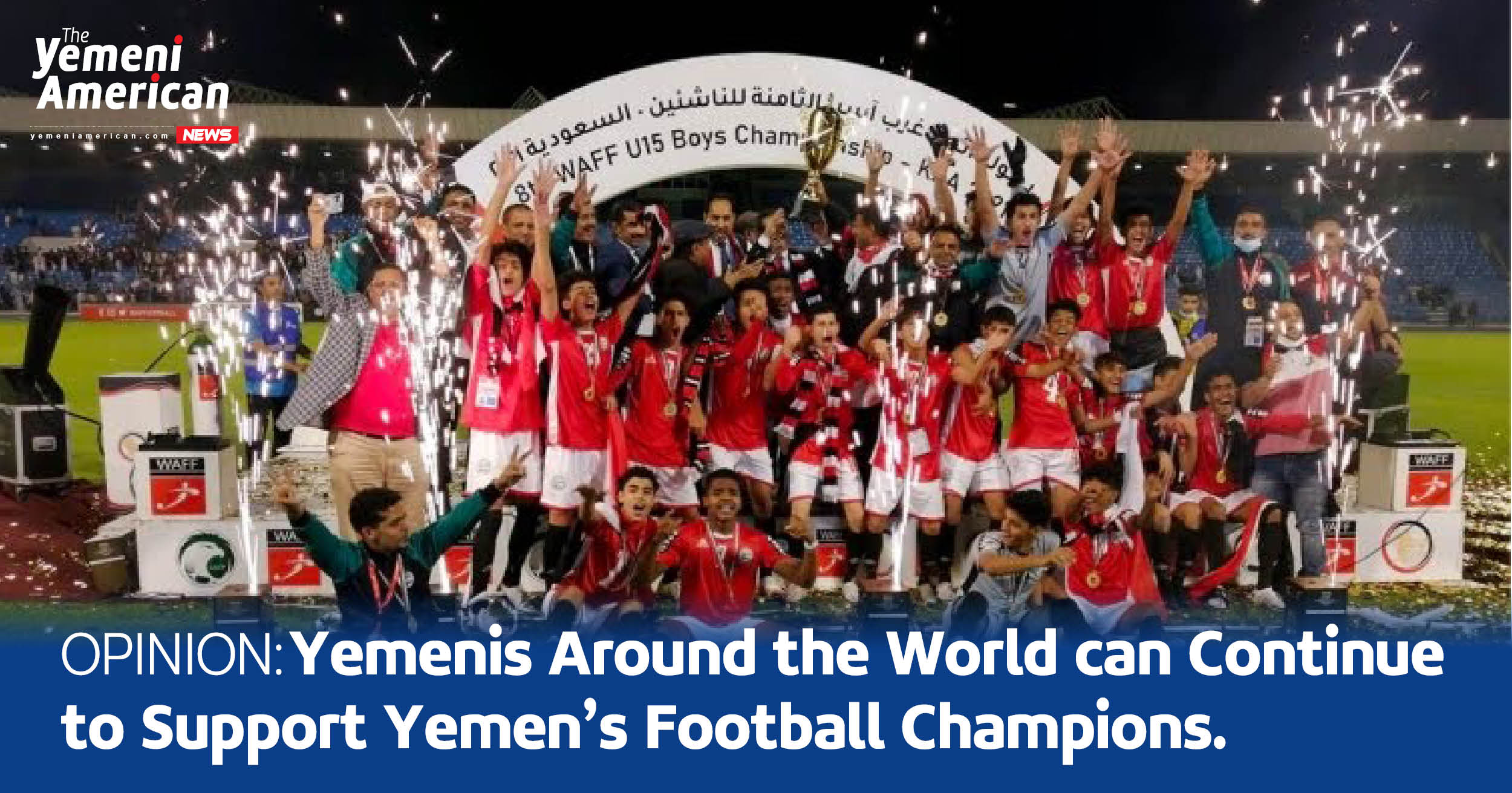 Sana’a, Yemen – After 7 years of war scenes, destruction, famine since the start of the Yemeni conflict, Yemenis finally caught a break: a first-ever soccer championship for the U-15 boys who competed in the West Asia Junior Championship’s 8th edition.

Celebrations broke out in Capital Sana’a as well as the temporary Capital of Aden. The skies of these cities were lit with fireworks, the streets were filled with rallies, expressing their joy and happiness at the success of the Yemeni team beating title contender, Saudi Arabia in cruel penalties.

Along with this championship, Yemeni striker Mohammed Al-Marwani was named the best player in the tournament.

This victory was not only within the framework of football, but it has many other dimensions. The country is in a stage of its history full of sorrow and destruction from the senseless war that has raged since 2011.

This moment of joy, and this young team, unified Yemenis from all the various factions and cities like no other; regardless of their political spectrum. The victory achieved is at a time full of sorrows and tragedies. And in difficult and bitter circumstances, Yemen is pushing through.

Yemen Football Hits its Stride in the Tournament

In an interview with US Arab Radio and the Yemeni American News, the two outlets hosted the champions in an hour-long, on-air interview.

The team’s coach Qais Muhammad Saleh spoke about the beginning of his work as technical director of the Yemeni team and the period of preparation he undertook to choose the team’s players. All of this in spite of the difficult circumstances that Yemen is going through.

In reviewed the team’s journey to the final match that ended with its victory and the championship of West Asia, Saleh referred to the match between the Yemeni team and the Bahrain national team. The team won by 5 goals to nill – a huge boost for the team’s hopes to win in the final.

Coach Saleh said he also took away the mobile phones from the team players during the tournament period to enhance their focus during the matches and push to the championship match.

The Stars in an Open Team

Issam Radman, one of the Yemeni national team players spoke about his feelings representing his country and his emotions when the team won the championship. He said he’s very ambitious about his hopes and goals for his future in football.

Muhammad Al-Barwani, nicknamed ‘Mbappe of Yemen,’ spoke of his excitement over the team’s victory. As the top scorer of the tournament, he says he would like to build on his success and stay on top of the health and physical education needed to continue in football. Abdul Rahman Al-Khidr also expressed his wishes for the team to continue to do their part to make uplift Yemenis.

When the Yemeni team beat Saudi Arabia on their turf, thousands of people swept the streets of Yemeni cities celebrating the victory. Social media sites also hosted thousands of videos showing celebrations of Yemenis at home and abroad. These celebrations crowned their country’s team for the first victor in the West Asian Junior Football Cup.

Coach Saleh pointed out that the Yemeni team is open to all. Any Yemenis who are talented in football have the opportunity to join the team. He says that there is no mediation or favoritism when selecting players in the team. The Yemeni youth abroad also have the same opportunity. Coach Saleh stressed that his team is not subject to any political affiliations and that it is far from the current conflict.

Yemeni Americans Around the World can Help

Two Yemeni American youths launched a campaign to collect donations to support the Yemeni junior football team. Centered in Michigan, the campaign is looking to celebrate the team that won the 8th edition of the West Asian Youth Cup even further.

This campaign points to the interaction of Yemenis at home and abroad to support this team, which gave Yemenis unprecedented joy. In the context of a political stage in which grief prevails because the repercussions of war, this small effort is promising of the Yemeni diaspora for its connection to Yemen.

The young men, which include the author of this article and Eyad Alshawhati, posted a video on social media, to launch the fundraising campaign.

The author affirms that the collection and disbursement of donations will be directed toward the institutional work of Yemen Aid Foundation, managed by Summer Nasser.

The author and Alshawhati also affirm that the Foundation will be responsible for handing over donations to the players, coaches and administrative staff. From there, the donations ensure the continued support of the team and its needs for continued training and qualifying, all in hopes of becoming the first Yemeni national team.

This team was able to unite 30 million Yemenis through this victory.

“From now on, our role as fans begin, as well as the role of the Yemeni Football Association and its duty to preserve the team by setting a time plan for five or ten years, during which this team will be qualified to be a pillar for the first national team,” Alshawhati said.

We hope that this team will represent Yemen in the World Cup 2026, which will be held in America, Canada, and Mexico. This team needs to start planning and preparing from now until 2026.

That is why this initiative was launched – in order to enable the team to do what it needs to do to continue to achieve.

But this work must be institutional, and for this, the campaigns organizers contacted a pioneer in charitable work – Summer Nasser, director of the Yemen Aid Foundation.The hope in working with Nasser is to adopt this project, to preserve these stars in contining practice of the sport and to be he first national team in the short future. This requires providing capabilities in light of their difficult circumstances compared to other nation’s teams.

That is why the two are starting a project to support this national team despite war and politics. Because they want to focus on supporting youth and talents through expatriate network starting with working through the Yemen Aid Foundation.

In a country where much has been destroyed due to war, this little victory by these young stars is a light in a dark tunnel.

If you would like to donate to the fundraiser for the Yemeni Youth Football Team to benefit the Yemen Aid Foundation, donations can be received at https://yemenaid.org/u16