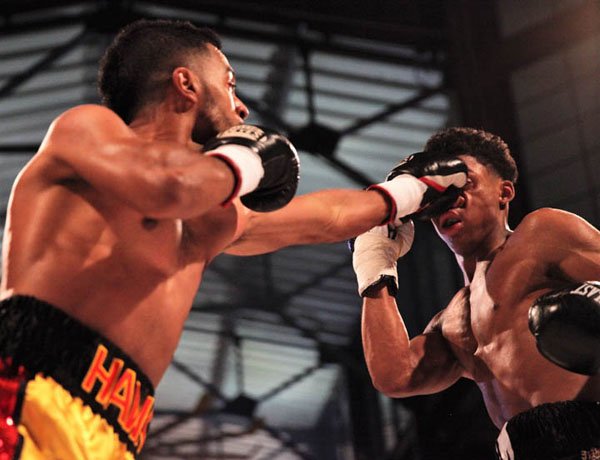 The Yemeni American News:
In a snowy Friday night in Detroit on December 16th, 2016, there were about 2000 boxing fans at the Eastern Market in Detroit who were patiently waiting for six fights to start at 9 pm. There were some technical issues with the ring which delayed the start of the fights. Prior to Mohamed’s Adam fight which was the prime event for the night, there were early fights, some of which featured young boxers as they have their first professional debut. Manuel Alfaro wins his pro debut by a 1:26 2nd Round knockout over John Amerson. Featherweight Angel Walker-Villegas won his professional debut by 1st Round knockout over Antonio Gonazales. The middleweight fight between Isiah Jones and Brian Jackson was astonishing as Referee S. Williams gave Jones a knockout win after an “illegal” late punch by Jones as Jackson was already on the ground. The longest fight of the night was between Winfred Harris and Zamir Young which took 6 rounds. Harris ended up winning in the last round. 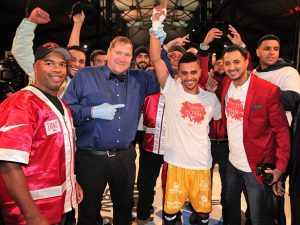 Late in the night and after a long wait, it was the big prime event between Mohamed Adam “The Hawk” and Hakeem Watkins. Adam who was 6-0 prior to the fight and scheduled to fight Watkins who had a record of 5 wins and 2 losses. The first round between Adam and Watkins witnessed some punches from both fighters and the audience were reacting to each punch from each side. In the second round of the fight, Adam came off stronger and quicker. With less than a minute into round 2, Adam threw two punches to Watkins’ face taking him to the ground making him unable to rise up. This is the fifth fight for Adam to win with a KO and his 7th straight win. The crowd erupted as soon as Adam threw the last two punches and Adam was declared the winner.

Adam in the post fight interview thanked God almighty for helping him win this important fight and thanked all the fans who came overwhelmingly to support him as well as the sponsors who believed in him. Adam’s popularity continues to skyrocket and highlights of his fight can be found on his facebook page, https://www.facebook.com/MohamedTheHawkAdam/