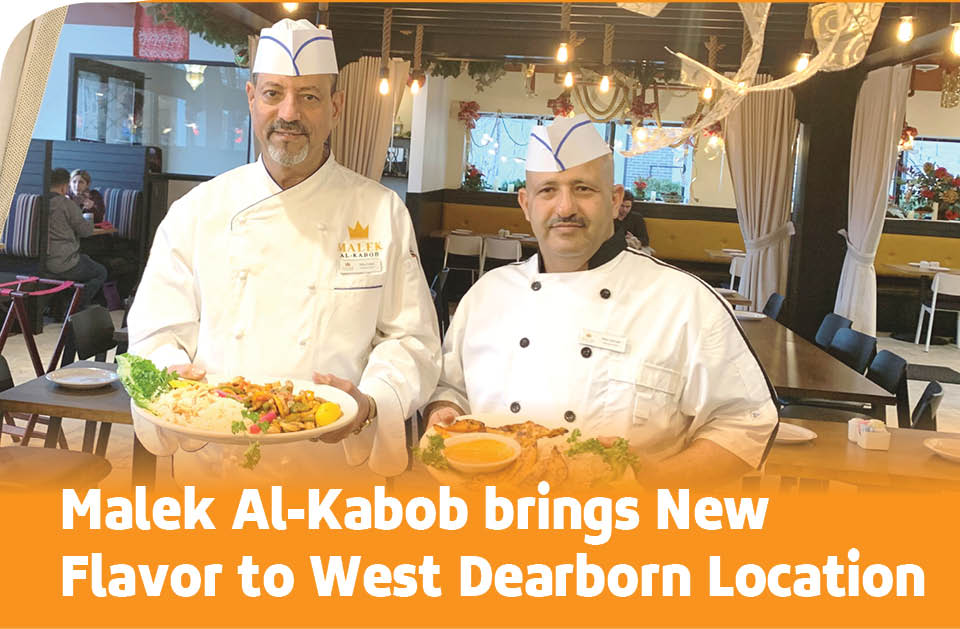 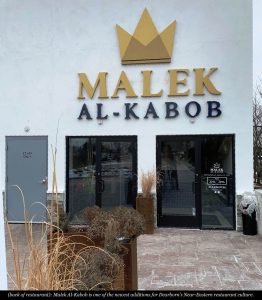 In every community, these challenges need to be met with strong and able leadership. Whether it’s through the religious, political, or cultural connections that people share.
West Dearborn’s vibrant food scene has a new staple for its lineup of Near-Eastern restaurants. The new destination has attracted full dining rooms of people craving the flavors of Malek Al-Kabob. Its blend of quick bites and flavorful dishes makes this the new place to go for lunch and dinner in the neighborhood.
Managed by Mo Obaid, the third location was a recommendation from a customer. “Dearborn is like nowhere else for Middle Eastern food,” Obaid said. “I wanted to be around the competition. So we wanted to show our product. It’s one of the top Middle Eastern foods in Dearborn.”

The new restaurant is owned by Malek Al-Kabob’s original founding chefs Abu-Fahd and Abu-Snan. It’s their combined culinary experience of 35 years that defines the flavors of Dearborn’s newest addition.
Mo, Abu-fahd, and Abu-Snan didn’t go into this unprepared. For this location, his company spent almost two years “studying” the location. Getting the best design for an upscale restaurant is no quick task. With outside help, Obaid turned this location into a carefully crafted location for the best food possible.
The original Malek Al-Kabob was in Taylor, Michigan, which is between Lincoln Park and Romulus. “I learned from all my mistakes that I designed in Taylor,” Obaid said. “I brought engineers in to describe what could do better. And we tried to avoid those when we built this one.”
Obaid said the work was worth it. Customers would tell him that the new location showed that the work made it a much better place. “The time we gave to the study, we made everybody happy and satisfied,” Obaid said. One customer would ask Obaid over and over again when it would open. But in the end, even he said the wait was worth it.
Malek Al-Kabob’s initial restaurant seemed to give him the following that would get people so excited.
The first Malek Al-Kabob opened 13 years ago in 2006. Obaid says that the restaurant would serve people from Dearborn and the Detroit Metro area. Almost 10 years later, Malek Al-Kabob in Taylor would be voted the best restaurant in the Detroit Metro area. So Malek Al-Kabob decided to move to the people who traveled so far for his restaurant.
The rationale for the move included the new economic upturn to the West Dearborn neighborhood. Just recently, the City of Dearborn was awarded a five-star rating for its relationship with local entrepreneurs in fostering growth for the city’s economy.
Mo Obaid is one of the best examples of the city’s community of entrepreneurs. Coming from Yemen at age 13, Obaid worked in nearly every market of Detroit Metro restaurants. According to Press & Guide, he started working downtown bussing tables at a pizza restaurant.
The initial restaurant was a joint venture with Obaid’s father. But the pair even outgrew that restaurant, having to move to a bigger space to fit all of their customer’s.
As a designer restaurant, the dining room’s interior is sleek and new. While maintaining itself as a destination for Middle Eastern flavors, the design appears welcoming as well as true to the culture of the food.
Although it’s always the food that brings the customer in, Malek Al-Kabob seems to have this facet perfected. Obaid thinks it’s the lamb that brings customers in every day. “It’s really what people are talking about here, especially at this new location,” Obaid said. “The lamb is very tender. We have lamb chops, lamb kabob.”
Another menu item that seems to be popular is the Chicken Sajji, which is a thinly sliced cut of chicken in a special, homemade sauce.
With its new location in West Dearborn, Malek Al-Kabob is sure to bring the most flavorful meal to anyone sitting in its carefully designed space.