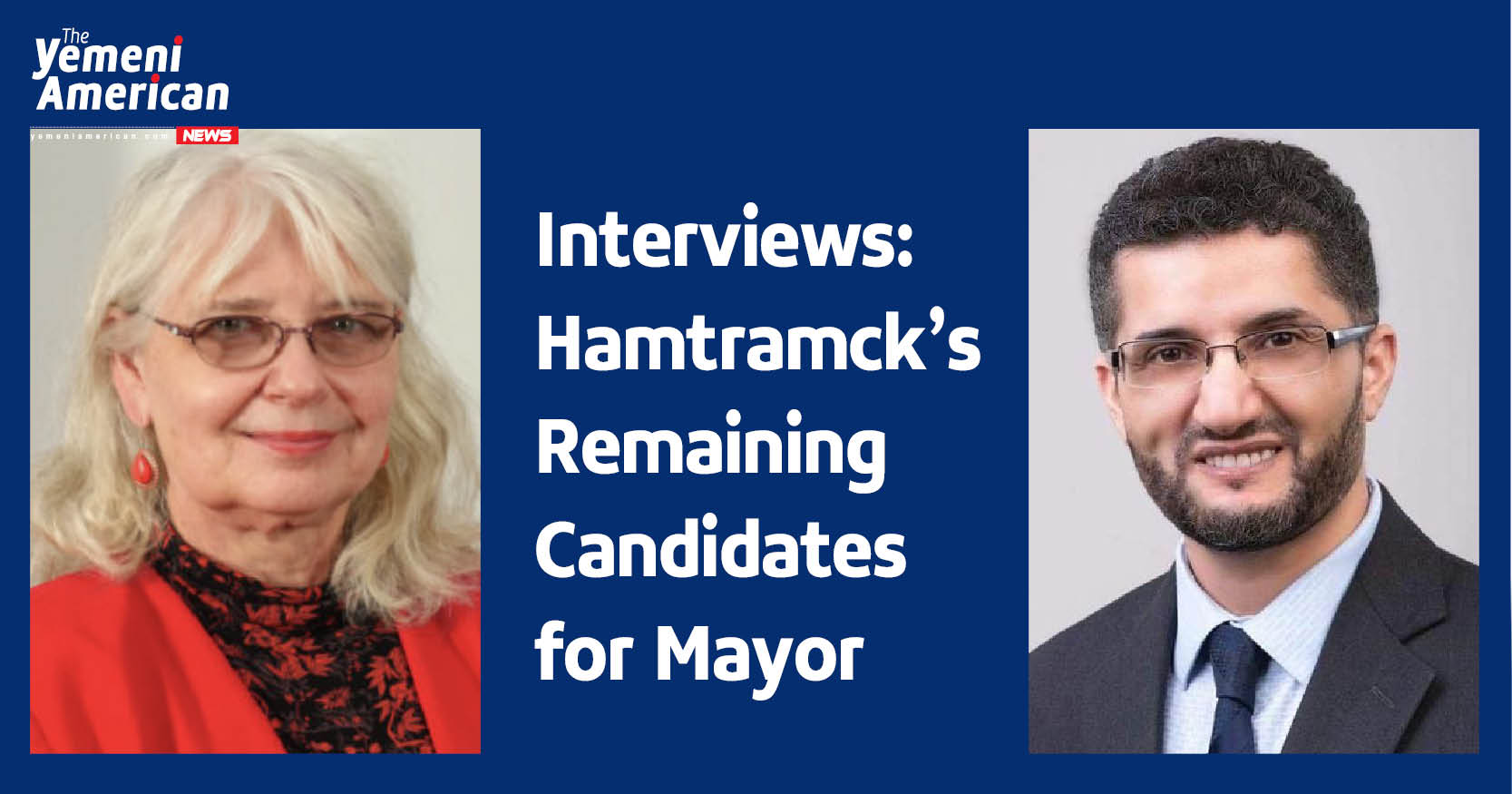 HAMTRAMCK, Mich. – With the general election for Hamtramck’s Mayor coming in just over a month, candidates have already shaped their political campaigns and are preparing for the last stretch. The two candidates vying for the highest office in the city of Hamtramck.

Dr. Amer Ghalib, and Incumbent Karen Majewski each drove past primary challengers Saad Almasmari and Kamal Rahman to go on the Nov. Ballot. The Yemeni American News reached out to both candidates for a final round of questions before the election. 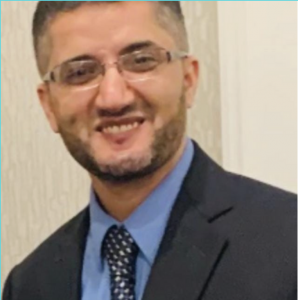 YAN: Can you introduce yourself? How could Hamtramck residents know you already?

GHALIB: My name is Amer Ghalib, I’m a Hamtramck resident for 22 years, came to the United States at an early age when I was in 11th grade, finished my last year of high school in Hamtramck High School, used to work 8-10 hours a day in a factory while going to school, graduated with excellence and received scholarships from multiple organizations including the Yemeni American Association. I started college in Henry Ford community college, then transfer to Wayne State University and finished my pre-medicine degree in biological science. I also have a bachelors degree in health science, both degrees are finished with honor. I then went to medical school and finished my medical school education at Ross University school of medicine which is an American Medical School based in Dominica. My third and fourth year of clinical rotations were mostly done in Sinai Grace Hospital in Detroit.

I work now in Hamtramck Medical Group under supervision of Dr Samir. I am a political and community activist, a poet, a husband and a father of three girls.

YAN: What are your intentions with running for Mayor? What do you hope to accomplish as Mayor?

GHALIB: To bring the community together and put an end to the serious division that is happening in Hamtramck, maintain diversity, and to build a functional and productive teamwork in the city hall that can solve the major issues we are facing.

YAN: What are the most pressing challenges for Hamtramck, and how are you uniquely capable of working through these challenges?

GHALIB: The budget limitations and the infrastructure dysfunction such as the sewer system and the bad roads are two of our priorities.

The community unity is also an important issue that we need to accomplish. All the above issues cannot be solved without a good working team inside the city hall with one shared vision and goal, to make Hamtramck a better and safe city for us and the next generations to come.

Safe and secure city can make it prosperous, attracting businesses and investments. Increasing the work force and the number of people who pay taxes, encouraging people to report their correct income, penalizing people who don’t care about keeping the city clean and who throw trash in streets, and those Reckless drivers, and finding other sources of sustainable revenue that would help recovering and balancing the budget.

The infrastructure is shared with the neighboring cities therefore we have to work with them and with Wayne county, state and FEMA to come up with possible solutions .I’ll do my best with the rest of the team to accomplish those goals. 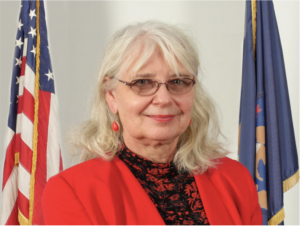 YAN: Can you introduce yourself? How could Hamtramck residents know you already?

MAJEWSKI: I’m Karen Majewski. I’m running for my 5th term as mayor, having been elected Hamtramck’s first woman mayor in 2005. Before that, I served as city council president/mayor pro tem and as an appointed member of the Historical Commission. I am a former president of the Michigan Municipal League, representing all cities and villages in the state, as well as a former board member of the Michigan Suburbs Alliance and Wayne Metropolitan Community Action Agency. I have a Ph.D. in American Culture from the University of Michigan, with a focus on the study of immigration and ethnicity, and am a published author and frequent lecturer and public speaker. Formerly, I was Associate Professor of Polish and East Central European Studies at St. Mary’s College in Orchard Lake, and a project manager working on economic and community development projects at the University of Michigan’s Institute for Research on Labor, Employment, and the Economy. I also own and have renovated a traditional storefront in Hamtramck where I run a small business, Tekla Vintage.

But Hamtramckans know me not just by my title or resume. They know me because I’ve been to their churches and mosques and halls.I’ve celebrated with them, honored their achievements, been to their weddings and funerals. I’ve visited their schools. I’ve broken bread with them. They see me not just at city council meetings, but every Monday morning on Facebook Live, where for over a year I’ve broadcast weekly COVID-19 updates: where to get help, where to get free food, where to get vaccinated. They follow me on Facebook. They message me. They call my cell. No matter what their background, the people of Hamtramck know they can reach out to me and that I will help if I can.

YAN: What are your intentions with running for Mayor? What do you hope to accomplish as Mayor?

MAJEWSKI: I’m eager to continue work on a number of projects we’ve been shepherding through the hoops to accomplish: the completion of 3 more homes to close our legal obligation under the R-31 housing discrimination lawsuit from the 1960s; the renovation of historic Hamtramck Stadium—one of only a handful of former Negro League baseball stadiums in the country; the next phases of our infrastructure improvement programs for streets, sewers, and alleys. Those are some projects on the ground that I’ve worked very hard on for years.

But additionally, I’ve also worked hard to make sure that residents of Hamtramck—no matter what their ethnic background or race, religion or spiritual belief, age, gender or gender identity, or sexual orientation—know that they are represented, that they are respected, and that they have a voice. I’ve spent almost 20 years building relationships across all Hamtramck’s diverse communities, and told the Hamtramck story to researchers and reporters from all over the world. As the spokesperson for the city, that ability to bridge bridges and to represent everyone is the mayor’s most important role, and it’s a job I’ve proven I can do.

YAN: What are the most pressing challenges for Hamtramck, and how are you uniquely capable of working through these challenges?

MAJEWSKI: The most pressing challenge for Hamtramck, broadly speaking, has always been money to provide the services and support the physical and human infrastructure our residents deserve. That’s not a challenge unique to Hamtramck, but it is made more difficult because we are an older, urban community. Problems like those are complex and require the work of elected and appointed officials at the local, regional, state, and national level, not any mayor alone. They are also long term issues that aren’t solved with one decision or policy. Creating relationships over time and advocating across those boundaries is essential, and that is something I have experience in and institutional knowledge about, as I’ve worked on these issues with my colleagues over the years.

While financial issues are shared by many communities, however, Hamtramck has a unique opportunity, as a city known for its diversity, to provide a down-to-earth model of how to work through differences of opinion, culture, and community vision. That’s why we’re the subject of so much world-wide interest, and it’s something that I have unique abilities to navigate, by education, by temperament, and by experience. I don’t believe any other mayoral candidate has built the same quality and breadth of relationships with Hamtramck’s Muslims, Catholics, Baptists, Buddhists, and Hindus; with Hamtramck’s Polish, Yemeni, Bangladeshi, Ukrainian, Bosnian, Albanian, and other ethnic and non-ethnic affiliated communities; with young and old, gay and straight; with Hamtramck’s artists and counterculture; with residents whose families have been here for generations and with newcomers to our community. I am the only candidate who has worked with and built relationships with all of these constituencies, and in a city like ours, that is of special importance as we work through issues together.