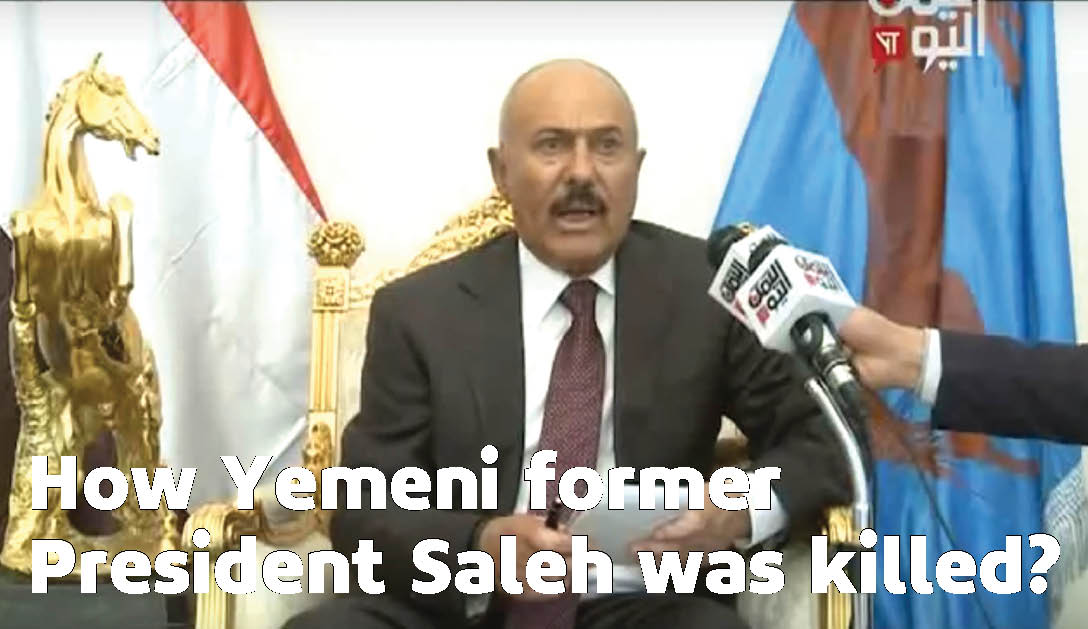 The killing of former Yemeni President, Ali Abdullah Saleh on the 4th of December remained obscure and remained a mystery until the following day when another account was revealed according to his eldest son and leaders of the General People’s Congress (GPC) party. The latter eventually showed the fabrication of the different accounts that were circulated hence.  These sources contend that Saleh was killed in his house during the confrontations; contradicting the media reports on the first day that he was killed in the outskirt of the capital, Sana’a.

Many accounts were given on the place of Saleh’s death near Al-Jahshy Village in his tribal domain of Sanhan to the Mareb Road and to nearby Dhabwah Military Base, other sources, however, contend that Saleh was killed in his house in Sana’a and was later moved to the Sanhan Road, in order to reduce the impact of his loss by his adversaries, to show that he was killed while fleeing, whereas these sources contend he was killed in combat against his adversaries in his house.

Saleh’s son, Ahmed Ali Saleh said in a eulogy for his father:  “My father was martyred in his house bearing his weapon of combat along with his comrades.  As he was strong in his life, he was as such when confronting God as a martyr of the enemies of God, the country, and the religion.”

Meanwhile, a journalist close to the leadership of the GPC stated to the Yemeni American News  that “the Former President Ali Abdullah Saleh was killed in his home when the Houthis stormed the house, and with him was the Secretary General of the GPC Aref  Al-Zouka..”

Dr.  Mohammed Jumeih, a well known Yemeni journalist based in Liverpool, UK wrote an article, which circulated in social media, titled:  For God’s sake, for the truth and for history’s Sake.  Jumeih therein said:  “the obvious truth – for those who love or hate the former President – is that he was in his house at the time the house was assaulted, carrying his weapon; and he was – notwithstanding our position vis a vis his policies – steadfast in Sana’a and bravely fought with his weapon in his hand until the last moment.  The Houthis resorted to fabricating an escape scenario.  They used a recorded tape of a conversation between Saleh and Vice President (of Hadi), in which the former requested the help of the Saudis, and they also used other fabrication tools, in order to belie the truth”.

In other similar news, activists on social media channels circulated a report, which they said was a diagnosis of a coroner, whose name was not given.  They said the coroner relied on the pictures and videos of “Saleh’s corpse”, and he put out, based on them a preliminary “criminal analysis” accordingly.

The report concluded that all the clinical marks on the corpse and the site of the crime – from the video and photos – confirm that the victim was in a defensive posture, and the photography took place five hours earlier at least.  The corpse was subjected preliminary steps to confirm the death and the identity of the deceased, and arrangements after the fatality.  The corpse was moved to more than one place and in more than one method.

The report also said:  the time of the mortifying wound of Saleh occurred five hours prior to the photography, based on the dry clotted blood.  The report indicated that there were no blood stains in the area of the brain which touched the blanket.  This only confirms that the man was placed in the blanket after the bleeding of the head has stopped.  The report also referred to the shrapnel effects on the face area, which show the man to have been killed while in a defensive posture.

On the severe wound on the back of the head, the report pointed out that the head was subjected to a medium caliber bullet on the skull, from very close range.

As the face and head were bloodless in the photos, according to the report the blood was cleaned prior to the photography.  The report also cited the gauze in the stomach area, which evidenced the stomach being hit in the left half, stating this as the likely reason for the dearth, which the report cites as evidence that the head wound was after the death, which was for the purpose of “desecrating the corpse”.  The report also pointed to the appearance of “wear and tear” to the clothes, as if the corpse was covered by something for a while, and the corpse was moved between more than one place, and by different means, not to mention the existence of signs of “tugging” on the clothes of the corpse.

The killing of Saleh was a big shock throughout Yemen, which Saleh ruled for more than 33 years and continued to prevail in the political arena for nearly four decades. His killing has raised many possible scenarios that the country will enter amid more war and destruction in an era of the unknown.