Hamtramck: Low participation from women in the workforce.. But things are changing 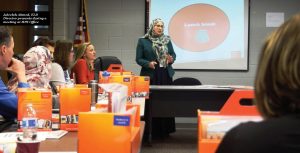 As the Yemeni community in Hamtramck grows in number and influence, community activists are calling for greater participation from women in the workforce.
According to 2017 US Census estimates, only 27.7 of women over the age of 16 in Hamtramck are employed.
Some old traditions may prevent women from seeking jobs in a largely conservative Yemeni community.
However, activists are emphasising the need for Yemeni American women to pursue higher education and work to increase the productivity of their families and community, noting that change is already underway.
Jaleelah Ahmed, the English Language Development Director at Hamtramck Schools said the schools and the community are working to improve the chances of newcomers from Yemen of getting a job and turn them into cultural leaders.
She emphasised learning English as a key to advancing and empowering immigrant women.
“The facilitators and liaisons are working with parents to help them transition into the new country while developing their English proficiency skills,” she said.
“Many people are seeing improvements and positive changes as the Yemeni Women are becoming a part of the professional workforce.”

‘Change in views’
For her part, Hanan Muhsin, an elementary teacher at Dickinson East and a resident of seven years at Hamtramck, said progress is being made and more Yemeni American women are joining the workforce.
“I have witnessed a change in views, and there is more acceptance of Yemeni Women in the work field,” she said. “I feel like more and more people understand the positive impact of having a role model to their daughters and the new generation.”
Nawal Almasmari, an elementary school teacher and Hamtramck resident, stressed the need for Yemeni American women to pursue higher education, even if they don’t plan on joining the workforce.
“I am viewed as a woman who got an education and is giving back to her community and is an encouragement for girls to get an education,” she said. “I always tell them that getting an education does not necessarily mean you have to get a job. You need it in your pocket because you never know what the world holds for you. If you ever need it, it’s there.”
Almasmari said opportunities for Yemeni American women in Hamtramck are improving overall, with many finding work in the school system, a field that was more difficult to get into in the past.
“While [it’s] still a very small group compared to the large community, it is a start, the facilitators, teachers, liaisons, paraprofessionals, and directors of Yemeni descent are setting a positive example of Yemeni women professionals to encourage and promote education for all females of all ages,” she said. “As educators, we have a commitment to engage all community members and all learners.”

Traditions
Employers in Hamtramck say they are eager to hire more Yemeni American women to reflect the diversity of the city.
Moortadha Obeid, the manager of Royal Kabob restaurant, acknowledged that “traditions” may get in the way of women from the community seeking work. Still, more Yemeni women can be seen working at pharmacies and medical clinics.
“We hope that Yemeni women achieve a greater presence in the workforce in the future,” Obeid said.
Tawfic Aljahim, who owns a shop in the city, called for changing social values that prevent women from working.
“There is no shame in work,” Aljahim said. “And this will inevitably change. It’s changing already. I think the new generation will be more accepting and encouraging of working women in our community, especially that our girls seem to be doing better in school than their male counterparts.”
Abu Mohammed, a Hamtramck resident, said even in Yemen women were active in the affairs of their villages alongside men, until an alien, “extremist ideology” that enforced face covering came to the country.
He explained that when Yemenis first immigrated to Hamtramck in the 1970s, the community consisted of mostly men, but as more families started to join, traditions relating to women were brought in with them.
“Now we are settled here, and therefore women’s participation in the workforce is needed for the family,” Abu Mohammed said.