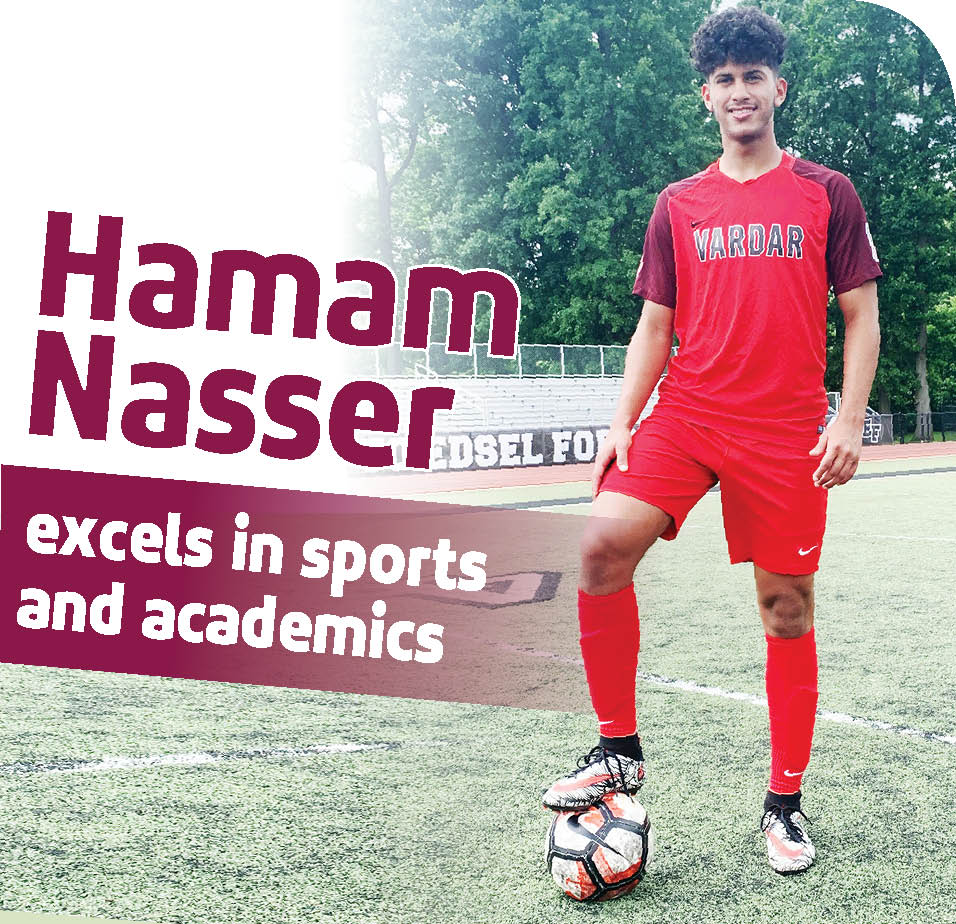 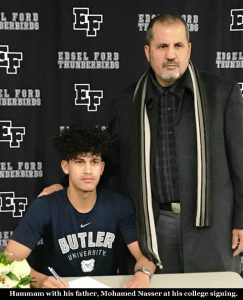 At the end of each school year, the success stories of Yemeni American students surface, especially for those who were able to break various obstacles and create a story of excellence that inspires everyone.

Hammam Nasser is an outstanding talented young man who was able to combine both sports and academics excellence. Hammam graduated from Edsel Ford High School in Dearborn with a cumulative GPA of 3.6, From an early age, he joined the Michigan Yemen Sports Association (MYSA), founded by his father Mohammed Nasser in 2003.

The high road for Hammam

Hammam tells the Yemeni American News “I played for the team for three years, and despite my young age, I was able to show maturity in soccer, which enabled me to score in many championships with my teams. Most notably winning the Chicago championship in 2014.”

“The year after, I was admitted to the Vardar Academy, and there I graduated in age groups.

Vardar is one of two major soccer academies in Michigan and is accredited by the Italian team AS Roma. He continued: “At the age of 15 and during my presence at the Vardar Academy, I was recruited to go to Sweden to participate in an international tournament, and scored six goals during that tournament.”

Between 2017 and 2018 Hammam received a call from the Major League Soccer (MLS) team, Portland to play for the age groups and played for them 6 matches, scoring a historic goal against LA Galaxy U17.

In 2018 Hammam was in the list of top scorers, winning first place on the Midwest and 10th in the United States, and this is an unprecedented achievement in his career.

As a result of his success, Hammam was pursued by the Indiana University Academy. He had to prove himself and to be accepted to the University. Hammam got what he was looking for: a full ride scholarship valued at $275,000 from the University, and his signing to Flint City, Which would help him get into playing professional for one of the Major League Soccer teams.

Hammam says: “You can attain both: academics and sports excellence. There are many famous soccer players who were able to do that. Balancing my sports life with my academic life is the most important thing I can do. Beside my early success in soccer, I am seeking a higher education degree. Recently, I enrolled in the College of Engineering at the University to pursue a major there.

The secret of success

“Having talent with instinct besides growing up in a sports family, as well as my passion for soccer around the world, had the greatest impact on what I am today,” Hammam says.

Hamam’s father spoke to the Yemeni American News, saying: “It is fortunate that Hammam was present at the time he found sports activity in the family.” Hammam had grown up in a family that breathes soccer. When asked about how Hammam was able to combine both academic and sports excellence, he made it clear saying “Every father’s dream is that his child achieves academic excellence.”

He added that Hammam’s success will not only be on the sports side, but will also contribute to the academic side, which in turn will enable him to mature more in his life, especially since he is still young and will be an example for everyone to follow.

On his role as the founder of the MYSA and the organization’s role in establishing the talent in the community such as Hammam’s, he replied: the association was established for everyone and since its inception, Hammam had a role as a player and a team leader  “We thank Almighty God for His gifts of talent. The credit goes to Ibrahim, Hammam’s older brother for also pushing him to be the best example and who helped him make it to the Waza team. On choosing Indiana University,  “We chose this university for my son was mainly because of the coach who has known Hammam for years and asked him to join the team.” “He is a British and has connections with big clubs in England.” Any soccer player would need a superb coach so he can improve his skills and also be marketed to the professional world.

Hammam comments on his future saying  “I see myself as a professional soccer player who is beyond his ambitions to play in MLS. In addition, I aspire to be an avid engineer. The future of my journey is long but my passion is what will decide what I want to be.”

When asked to give advice to his fellow young soccer players, he said “Success does not come by chance, but needs time and effort. Those who have ambitions in any area, they should never give up hope or surrender but rather believe in themselves that achieve their aspirations”

Publisher Rasheed Alnozili who was also a soccer player for the Yemeni Youth team says “ After watching Hammam play with his Academy team in various competitions, I saw a great striker who is capable of scoring at any moment he has the ball in front of goal. He has an instinct for scoring.”

Alnozili adds “Hammam is a great investment who just needs the right marketing to get to one of the big clubs in MLS or Europe.  “The efforts of Hammam’s father and his insistence on the success of his children as well as members of the community in general, is not strange and should be commended.”