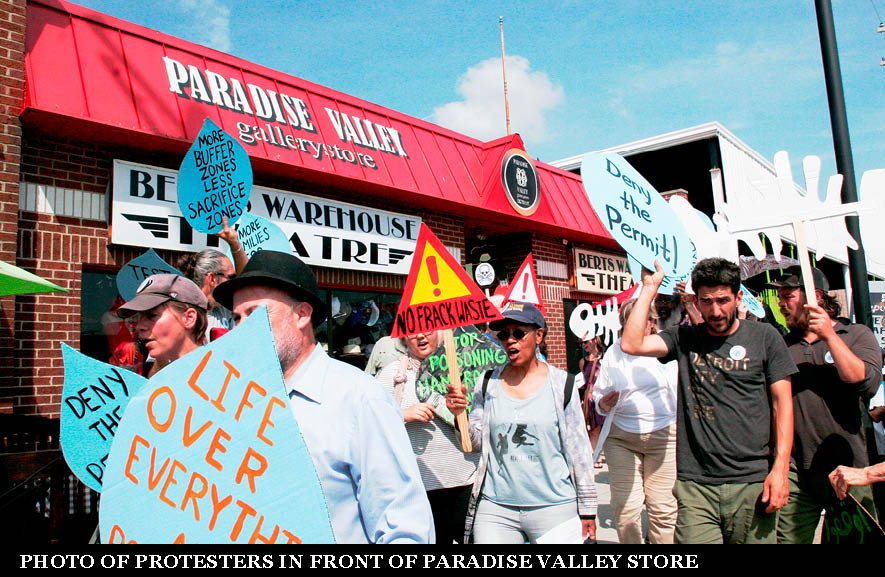 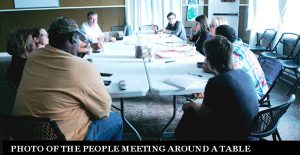 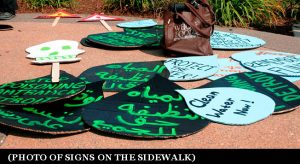 In the sort of heat that could melt all the energy out of a person, people held their protest signs to shade their long hair, shaved heads, Taqiyahs and Tigers hats. They were standing between Dequindre Cut and Eastern Market in a place famous for grabbing tourists from the suburbs for a Saturday in Detroit.

The plan was to steal everyone’s attention from picking the perfect flowers for their porch. Yell as loud as they could. And let everyone know that there’s something like a time bomb growing in the most densely populated Michigan city.

US Ecology is a hazardous waste treatment Facility in North Detroit. The facility is close enough to the Hamtramck Border for a public meeting to have been held at Bridge Academy.

It was never the most ideal neighbor. The facility has over 150 violations between 2010 and 2016, but US Ecology says most came from before they purchased it from Dynecol Inc. Although US Ecology was the parent company of Dynecol at that time.

When US Ecology bought the facility from Dynecol, they also submitted a request to expand the facility’s storage capabilities over nine times what’s currently available. But things changed as the governor’s office saw job loss increase around Michigan, following the 2008 financial crisis.

Growing with the boom in fracking from the decade earlier, Snyder’s business-friendly administration slowly increased the amount of fracking waste that could be brought into the state’s landfills.

When the radioactive material comes out of the ground with the chemicals and sands, it becomes a technologically enhanced radioactive material (TENORM) that needs to be disposed as waste. Michigan has been accepting more and more of it until the end of Governor Rick Snyder’s Term.

US Ecology originally wanted to store the radioactive fracking waste when they first sent their request. Protests from the Coalition to Oppose the Expansion of US Ecology took that idea to the city and eventually got Duggan’s blessing against the radioactive storage.

There was a good-faith attempt by Michigan Department of Environmental Quality and US Ecology to allow the public to voice concerns over this. First they advertised a public meeting in too small of a newspaper.

According to one person at a Coalition Meeting on Jun 27, 3 people showed up for that first public comment meeting.

But the good-faith attempt didn’t account for Hamtramck, or its diverse languages-speakers. So they organized another meeting that was described by a few members of the Coalition as a disaster. There were no useful language services and most of the media technology didn’t function.

As of now, there’s no do-over for a public meeting. Much of the information that wasn’t shown in the meeting is available online.

In a private meeting that happened on the June 27, the Coalition met with prominent activist-turned  Environmental Justice Public Advocate Regina Strong. After working with various environmental organizations in Detroit, she landed a job in the Michigan Department of Environment, Great Lakes and Energy (EGLE).

The issue they brought to Regina wasn’t just about having to live next to US Ecology. They talked about how Detroit had the highest pre-term birth rate in the country. Diane Weckerle talked about how the toxins in our environment, like Lead and PFAS were once said to be non-toxic. But that didn’t stop future generations from getting sick by Lead poisoning.

Regina Strong told the group that the expansion will probably be approved. There were some small victories like the promise to not store TENORM. But there wasn’t much that could be done.

On June 29, the Coalition to Oppose the Expansion of US Ecology packed their signs. Lying on the ground in a far corner of Eastern Market, around 30 protesters talked among themselves about raising awareness. People who first started to oppose US Ecology years ago stood with people who had just arrived on the issue.

They brought megaphones, passed out a list of chants, and gathered a stock of pamphlets to pass to the Eastern Market shoppers. One person dressed like the grim reaper. Others carried signs with cardboard cutouts of fish skeletons.

Walking outside the busy sheds of vendors, people stared at the protesters. Some shook their heads. Others joined the chants. And many took the pamphlets.

In a way, people might not be able to know how safe the US Ecology Expansion would really be. But with its densely populated location, handling of dangerous materials, and history of mistakes, there’s more of a risk that people just don’t want to bet on.