Dearborn Police Wraps the Year with everything you need to know 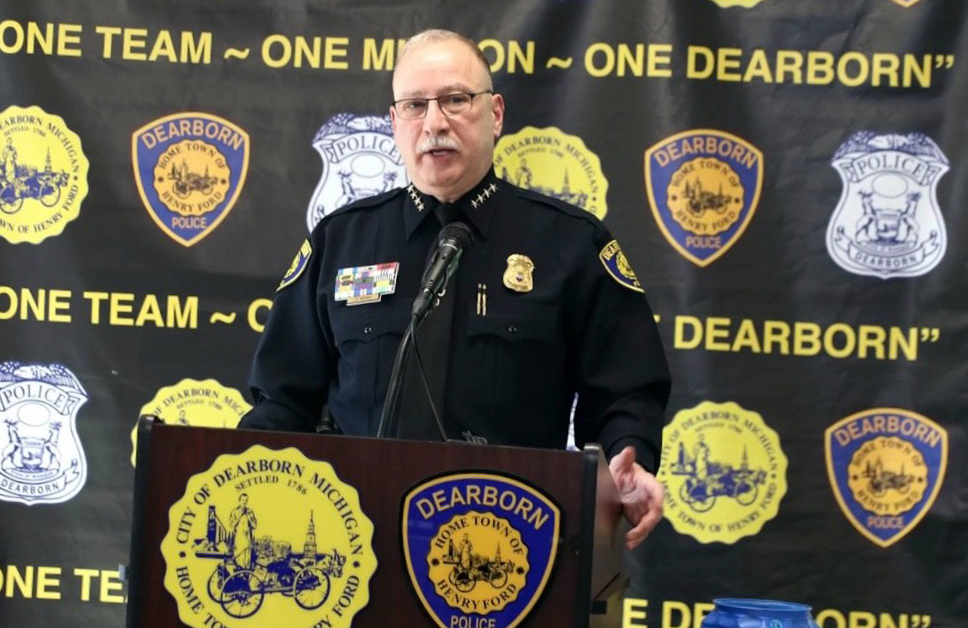 As one of Metro-Detroit’s major destinations for Arab-American Heritage, American History and Shopping venues, Dearborn attracts more than just residents for a stay. But crimes reported still remain just as common as some other communities in the metro-area.

Over the past month, Dearborn has made some high-profile arrests. Two such arrests resulted in the confiscation of massive amounts of marijuana products from two teenagers in possession of the drug. Despite it now being legal, the substance is only available to use for people above the age of 21.

Another high-profile arrest for armed robbery, among other charges, led to the removal of five rifles and one handgun. The two were charged with felon in possession of a firearm and possession of ammunition.

Both arrests were the result of traffic stops based on information the police had. Other arrests made were based on crimes reported.

“The men and women [of the Dearborn Police Department] have done a terrific job,” Chief Haddad said. “And so have the citizens because they report the crimes. They call us all the time.”

Weekly crime statistics have been reduced by 9.6% over the past year. This continues a trend that saw nearly half of the crime rate in Dearborn reduced since 2008.

“We’ve been on a pretty good roll,” Chief Haddad said. “The past decade, we’ve reduced crime by 45% and I’m very proud of that. But it’s a constant battle and it requires constant maintenance. It’s not going to go away by itself.”

The Police Department’s use of force incidents rate has also been steadily declining over the past decade with 44 incidents total. Of those, 37 involved standard take-downs while 5 involved taser deployment and 2 involved pepper spray deployment.

Chief Haddad also said his department’s use of random traffic stops have helped locate around 400 wanted felons each year, with as many as 700 during the highest year in the past decade.

Dispatchers have also taken a major role in the reduced crime rate. Since both fire and police use the same dispatch, called the Dearborn United Dispatch Center, Dispatchers are able to coordinate all departments for more efficient emergency response.

Chief Haddad says that phone scams, which predominately target elderly people, have been on the rise for the holiday season. The phone scams will typically request personal information like social security numbers or money for fines of various types.

“We just want to remind people that if anyone is asking for this sort of information, that they should just ignore them,” Chief Haddad said.

Since the decriminalization of Marijuana, Dearborn Police reported some challenged for the adjustment. Dearborn is one of numerous communities that have opted out of recreational marijuana sales. But since the state law has deemed the substance legal for adults to consume, Dearborn Police is forced to respond.

“The dogs have to be retrained, we’re training our officers on how to detect impairment with drugs and Marijuana,” Chief Haddad said. “So that’s a whole new challenge. But the good news is we have one of a few in the state – one of our officers is highly trained in that.”

What You Need to Know

New challenges like the decriminalization of recreational marijuana has forced everyone to respond. Chief Haddad encourages adults to reduce young people’s exposure to the drug. The penalty for

As of December, Chief Haddad says the most common crimes are crimes of opportunity. Usually it’s theft from unlocked cars. “People want a quick fix, they steal money out of an ash tray,” Chief Haddad said. “Or they see a purse. Oftentimes there’s no money in the purse, but people lose their IDs. So it does cause hardship.”

The second most common sort of crimes are assault and Domestic Violence. But this, Chief Haddad says, is a priority for the Police Department.

“We’re going to come back after the new year and try to up our game just to try and slow [the prevalence of domestic violence] down a little bit,” Chief Haddad said.

As for location, Chief Haddad adds that there is no strictly defined area where these crimes happen. “There’s no place where you can pin-map it,” he said. “It’s pretty pervasive around the whole city.”