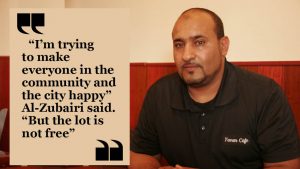 Between the man who owns one of the most popular restaurants in Hamtramck and a community group who’ve worked to bring the Populace together stands the Yemen Mural. Spanning 80 feet, with a price tag of more than $20,000, the mural was intended to be a celebration of Hamtramck’s diverse population.

Its artist, named Dasic Fernandez, called upon tropes of freedom, culture and the country of Yemen itself. In an interview, Fernandez talked about trying to put the viewer in the mural by depicting figures in the eyes of the man and covered woman. Throughout the painting are trees that can only be found on an Island off the coast of Yemen.

“The country’s at war right now and a lot of those sites that are captured in that mural have been destroyed,” Shaffwan Ahmed of OneHamtramck said. “The trees have been destroyed by natural disasters, like tsunamis. This has cultural significance in Hamtramck. Some of those things are gone and this is a representation of that.”

The Yemen Mural is on a wall that separates Sheeba Restaurant and an open lot. Ali Al-Zuebairi, owner of Yemen Café, bought the lot as part of a package along with the building where his Café now serves people from all over the surrounding communities.

Al-Zuebairi bought the building and the lot after the mural had already been painted on through the work of a group called OneHamtramck. Led by Bill Meyer, OneHamtramck is responsible both the Yemen Mural and the Bangladesh Mural in Hamtramck.

“I’ve gone out to see people in cars just staring at the mural,” Meyer said. “People come from all over to see the mural. I’ve heard stories and stories. It’s exactly what we wanted the mural to do. Bring pride in the community.”

However, a building application for the lot has just been approved by the city. Al-Zuebairi’s plan is to build a small hotel that other business owners believe would bring more people to their establishments around the city.

Because the hotel would completely block the mural, OneHamtramck has been trying to stop the construction. As of right now, the group says they offered to buy the lots behind both restaurants for a trade. Those lots would offer more land for Al-Zuebairi’s building plans.

However, Al-Zuebairi says OneHamtramck approached him about giving them the lot without any offer of a trade.

“I’m trying to make everyone in the community and the city happy,” Al-Zuebairi said. “But the lot is not free.”

OneHamtramck also said that in addition to these offers, they would work to make the street of the future business into a two-way road for better traffic. But according to representatives from OneHamtramck, Ali Al-Zuebairi has been refusing these offers.

“It’s up to him,” Al-Gahinm said. “Because [Al-Zuebairi] owns the land. Nobody has the right to stop him.”

The image is something that members of OneHamtramck say could never be made again. Even though Al-Zuebairi offered to pay $8,000 for the mural’s replacement, the process of replacing the mural is close to impossible for OneHamtramck to afford.

“This has intrinsic value that you really can’t put a price tag on,” Abraham Aiyash of OneHamtramck said. “The fact of the matter is this is something that’s elevated the Yemeni Community in ways that celebrates its rich cultural history.”

Despite the building application being approved by the city, Al-Zuebairi’s project still needs to get approval from the city council. So far, Council Members have not voted on the issue.

Shaffwan Ahmed and Bill Meyer established an event to take place an hour before the next council meeting to help people communicate their stance on the mural. He believes it will give people the opportunity to talk about solutions or just to tell the council what the mural means to them.

“Council won’t know that people want to protect this mural, aside from their own opinions on it,” Ahmed said. “So we put this event together to urge residents to say ‘hey if you want to save this mural, let’s find a compromise.”

The mural is a powerful reminder of the beauty of Yemen. But in a predominately low-income community where opportunities can sometimes be hard to come by, the chance to expand a wildly successful business enterprise is something that must be handled carefully.

As of right now, no compromise has been found for the mural. On August 13, residents of Hamtramck are invited to share their opinions during the city council meeting.

“It’s more than just paint on a wall,” Abraham Aiyahs said. “It’s a symbol of hope for folks who have fled war torn Yemen when people walk out of a Yemeni restaurant and say ‘wow, the patterns, the Socotra trees give me nostalgia,’”