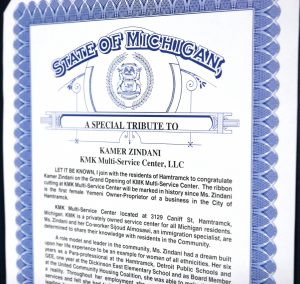 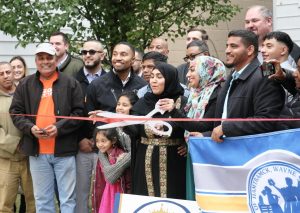 State Representatives, businesspeople, Hamtramck City Council Members, and a full crowd all stepped into the back yard of a soon-to-be-opened business. They stood in the October cold and, after the ribbon-cutting, welcomed a new owner to Hamtramck’s community of entrepreneurs.

But this enterprise is a first for the city’s vibrant array of businesses. KMK Multi-Service Center provides resources that only comes from years of experience in public service. It provides counseling in a number of state-wide processes like public benefits. And it’s an entirely new perspective to the business world of the city.

Kamer Zindani made history in Hamtramck’s Business Culture. As the first Yemeni woman to own and run a business in the city, she explains how this venture was years in the making, starting with work in the public sector.

“I was working as an outreach specialist,” Zindani said. “But I was limited to what I could do, and the community was telling me to open up my own business because they needed more services.”

As of 2016, the Wayne County Community Needs Assessment noted that many people who live within the spectrum of poverty reported being denied services on the basis of family status and income level, among other criteria. More importantly, they stated this as a cause for their difficulty in moving out of poverty.

At the time of the Community Needs Assessment, Zindani worked for the Wayne County Community Health Center in Hamtramck. The proportion of people living under the threshold of poverty in 2016 was 48.5%. It’s estimated that the proportion in 2019 is 50.85%.

People like Kamer usually connect people with these services. But in terms of need in the county, there’s only so much that she was able to do. “We have so much need here,” Zindani said. “I’m so happy that I opened up the office for the community and for the people that need services.”

The opening of Zindani’s business was big. It became a campaign stop for the people running for city council seats, with Ian Perotta, Saad Almasmari, and Mohamed Alsomiri stopping by.

“This is something to be proud of,” Almasmari said. “I think Hamtramck needs more businesses. Yes, we might be tight on business spaces, but if you search for something, there’s a great place to have your business.”

Business has been a heavy topic for news coming from Hamtramck. Many people have been relocating from the business-saturated centers in Detroit in search of opportunities in Hamtramck, according to the Detroit News. Most of the new entrepreneurs say they felt attracted to the diversity of the city.

Being the first Yemeni woman to open a business in Hamtramck came with its anxiety, says Zindani. “It was more the fear of how they’d see me as a woman in business,” she said. “And once I put it aside, I got encouraged by many people.”

But until she finally registered her business with the city, she wasn’t even aware that she was the first woman from Hamtramck’s Yemeni Community.

“I honestly didn’t even know that until I went to the city,” Zindani said. “And that’s when someone who worked at the city said: ‘I think you’re the first Yemeni woman.’”

Ian Perotta, a councilmember for Hamtramck and the owner of a bar, says there’s a good culture for businesses in the city.

“We try to look out for each other when you’re first opening up,” Perotta said. “It can be difficult to navigate the ins and outs of running a business, so if you’ve got other people who’ve had similar situations, it can be helpful.”