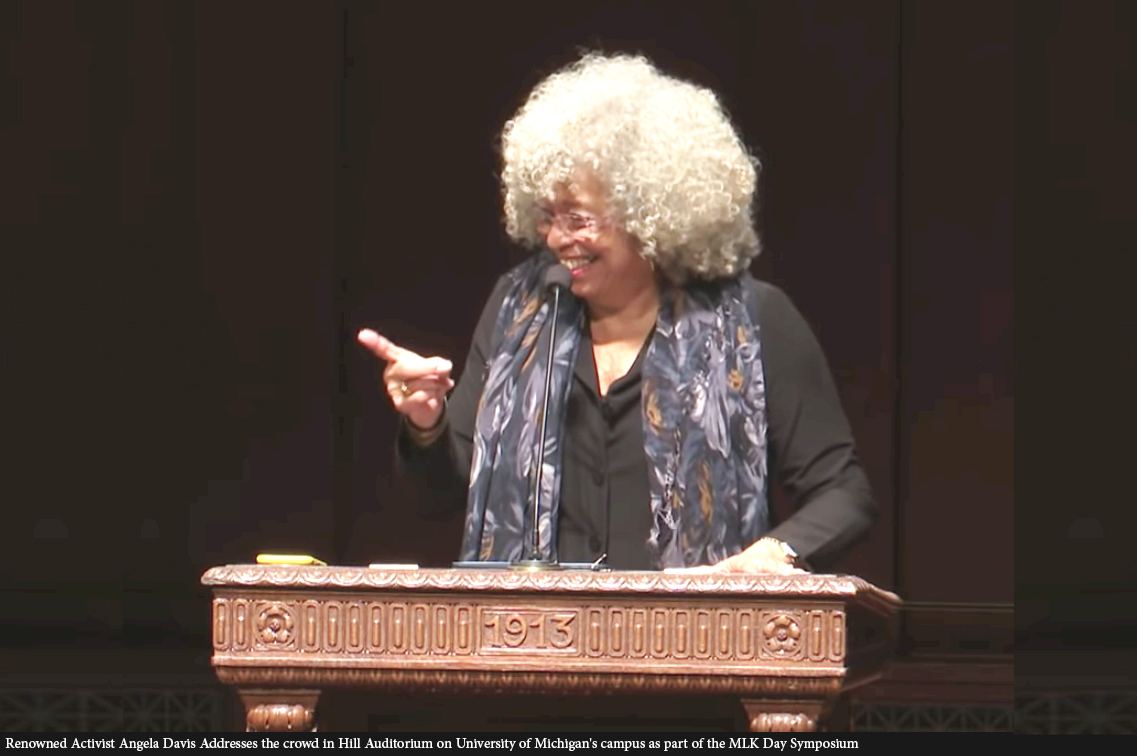 “The conscious of an awakened activist cannot be satisfied with the focus on local problems,” Davis said. “If only because they see that local problems are all interconnected with world problems.”

Angela Davis is a complex figure – once, she was accused of being a part of a hostage situation-gone-bad in a California courthouse during the most bitter years of the long Civil Rights Movement. Davis has maintained her controversial status in order to bring radical politics to the forefront of the fight for justice in America.

So it’s no surprise that the University of Michigan Ann Arbor has asked her to address an audience of hundreds for their annual Dr. Martin Luther King Day Symposium. The focus of her hour-long speech was on injustice in the world.

For Davis and many other activists throughout the United States, Dr. King stands as a pillar of inspiration for their work. Dr. King was a radical for asking Americans to imagine a better future. With his “I Have a Dream” Speech in Washington D.C., he asked the young and idealistic of the country to dream of truth and justice in the coming ages.

As the aging Angela Davis addressed the audience in Ann Arbor, she talked about the most important lesson that Dr. King gave her and many other youth in that time: the work is never going to be finished.

“We had not, during the era of Dr. King, begun to realize how much more we would learn about injustice in the world,” Davis said.

She’s talked about islamophobia. Anti-Semitism. Racism. And the past and future of Apartheid in the world. Without a pause for breath, she brazenly called attention to those states, institutions and corporations that we all have to fight against for the world to finally look toward Dr. King’s Dream.

It’s been 52 years since Dr. Martin Luther King was assassinated in Memphis Tennessee. Throughout the last years of his life, he’s worked against injustice for the African American people. But like Medgar Evers, Malcolm X and Viola Liuzzo, his life was taken.

MLK day is not to remember the man. Instead, it’s to remember his dream. “I have a dream that one day this Nation will rise up, live out the true meaning of its creed: ‘We hold these truths to be self-evident, that all men are created equal,’” Dr. King said.

“And so what we most need now is to generate hope,” Davis said. “Hope that must be continually regenerated, reinvigorated, and this, I think, is the collective challenge of today.”