Dearborn, Mich. –  In a lawsuit filed May 22, the American Moslem Society alleges that Woodmere cemetery has breached its contract with the Dearborn Mosque in an effort to agree on a more profitable contract for the cemetery. Filed in Michigan’s Wayne County Circuit Court, the lawsuit will be seeking relief on a later date, according to the docket submitted by Steven Cohen, the Mosque’s legal counsel.

The original contract being disputed was agreed upon in 2017. It set the price of 1,000 graves for $625,000, which would be paid by the AMS Mosque over a 5-year period. At the beginning of the breach of contract, AMS had already paid $380,000 to Woodmere Cemetery. This was before the mosque had started using any of the burial sites that were allocated in that 2017 purchase agreement. 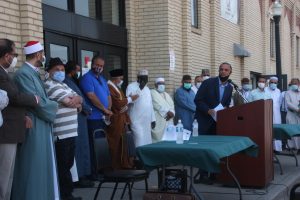 A Press Conference was held on July 3 in order to give local Islamic leaders the opportunity to talk about the breach of contract.

“It’s basically a power play to either generate some easy cash flow or sell the same graves at double the price,” Mr. Cohen told the Yemeni American News.

Leaders at the AMS Mosque held a press conference to discuss the details of the lawsuit. They talked about the relationship that Woodmere Cemetery has held with AMS Mosque for decades. Over the past 32 years, the AMS Mosque, and many other Mosques in the surrounding areas have been using the land through its original agreements.

“In my 32 years,” said Imam Mohammad Mardini. “I buried many loved ones from our communities, from everyone from every background, all of them united here.” 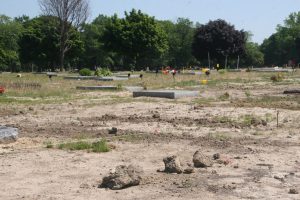 The Lawsuit also alleges that the funeral plots that were bought by AMS Mosque are in a state of disrepair, despite an upkeep agreement in the original contract.

Not only is this an important legal battle for the Muslim community, but this is also a protection of one of the most important tenants of the faith.

“This is not just simply a concern for the American Muslim society this month, but is a community concern in general,” said Executive Director of Michigan’s chapter of the Council of American Islamic Relations Dawud Walid.”

“Besides our community, suing Woodmere Cemetery for breach of contract, we also believe that they breached a Community Trust. For us as Muslims, our burial rights are sacred. It’s something that is very integral and very important, as far as our faith practice. So, not only is our Burial Rites something important, according to Islamic juris prudence, but the ability for us to bury our debt according to Islamic rituals in right is protected by the First Amendment of the Constitution of the United States of America.”

It’s not about just finding a new cemetery, leaders say. Woodmere cemetery is a place where the Metro Detroit community has been burying members of its deceased Muslim neighbors for decades. And with so many loved ones lying to rest on its grounds, families wouldn’t be so easy to give up what’s become an important place to rest for the community.

Attempts to reach out to both Woodmere Cemetery and its parent company Midwest Memorial Group both went unanswered.