A MODERN VOICE IN A TIME OF WAR: SAMA’A AL-HAMDANI’S JOURNEY FROM RELUCTANT AMERICAN TO MODERN MILLENNIAL 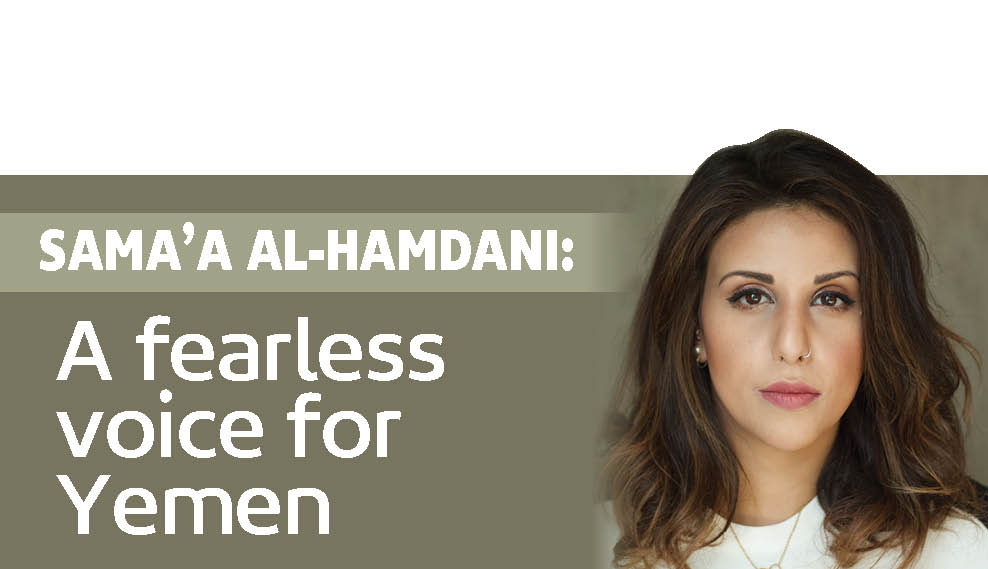 In the midst of the current crisis going on in Yemen, it is not unusual to find Sama’a Al-Hamdani discussing causes and outcomes of the Yemeni conflict across the television screens of international media, from CNN to Turkish-based TRT English to BBC and Chinese-run CGTN.

She has been a powerful voice on expert panels that address the competing roles of international and local players in Yemen. On one such panel in 2015, Sama’a found herself among a group of experts, including Saudi Ambassador Al-Jubeir, in which she advocated for an end to foreign intervention a few short months after the beginning of the Saudi Arabian air campaign in Yemen. Sama’a shared, “I recall concluding that it was my professional and moral obligation to state the facts as I believed them: Yemen’s war will lead to a humanitarian crisis, and ultimately, a political settlement will have to be mediated. I indeed spoke as an anti-war activist.”
The trajectory of this stance has led Sama’a to be one of the many expert voices of discontent in regards to the conflict. However, the war has certainly changed her personal and professional path: “I never in a million years would have guessed that I would end up settling in the United States or be considered a Yemen-American activist.” Yet, here she is.
Sama’a came to the United States a year after her high school graduation in order to reunite with her mother. Sama’a came reluctantly. She wanted to remain in Yemen and continue with her schooling and work, but her family tugged at her to join them. As she did, Sama’a jumped headlong into her new home in the US, however she recognized her privilege: “I am no more special than anybody in Yemen. It’s just that I was born to the right family that was able to send me here to study”. Sama’a believes the question of origins in Yemen has become politicized. Despite the fact that Sama’a lived most of her life in the capital, Sana’a, she has family from disparate places in Yemen, from Taiz to Dhamar to Ibb, Aden and Abyan.
It has become important for Sama’a to cast aside regional identities and for all Yemenis to stake their claim to Yemen as a whole. For her, the divisions that are defined by region have become destructive within the Yemeni political climate today: “I believe in the modern nation-state….I feel connected to everywhere [in Yemen].” She is greatly inspired by her parents, both of whom had careers in Yemen, stating “I feel like I had a good family model of what I want to be, which is a citizen of Yemen with a good job [so that I] can contribute to society.”
When asked where she obtained such an outspoken and forceful persona, Sama’a contends it comes from her beloved grandmother, Fatimah Al-Hajji, who she refers to as Hajjiyah, who served as the matriarch for her family during her formative years in Yemen. “Her objective,” Sama’a explains, “was to instill resilience, in the most feminist fashion”. During those childish outbursts, Grandma Hajjiyah would exclaim, “Be a woman!” She demanded that Sama’a be strong and taught her how to command “inner strength and determination,” a quality that has served Sama’a so well all these years later.
As Sama’a pondered how American she has become, she shared her thoughts on the Yemeni-American community as a whole. She sees Yemenis that have immigrated to the US through millennial eyes: “Yemenis in America are more Yemeni than Yemenis in Yemen. Especially those that came here in the 1970s. They hold on to a Yemen that is frozen in time – which I admire to a certain extent. Yemenis that have come from Yemen in recent years have progressed and they merge their identity with a global one.”
Sama’a, by living in DC, rather than in the midst of the Yemeni diaspora, has become fully American in her mind: “I live like a millennial in DC.” But there is a struggle associated with her experience, as she admits, “Mine is a first-generation immigrant story chasing an American dream that we all acknowledge is no longer attainable, especially for those that don’t have specific backgrounds. As long as my name is Sama’a Al-Hamdani and I am from Yemen, I am going to be at the bottom of the food chain here.”
Sama’a is proud to be both American and Yemeni: “I feel very at ease at being both Yemeni and American. It feels natural. Because I was born and raised in Yemen, the Yemeni part is so comfortable. Because my mother and my mother’s mother were Yemeni, I will always have that with me….Yemenis are a tenacious people and they are really resilient. I have somehow tapped into that….the people are so tolerant and patient [in Yemen].”
Sama’a cares deeply about Yemen. Though her voice is strong, she has been mischaracterized based on her assessment of the current conditions in Yemen. “Having different perspectives is natural, but a lot of the mischaracterization is intentional and is intended to distract audiences from my anti-war messaging and shift the conversation away to my appearance or [my] family.”
She, like many Yemeni-Americans, has a sense of responsibility to her ancestral homeland. Through her project with The Yemeni Cultural Institute for Heritage and the Arts, Sama’a aims to highlight the artistic heritage of Yemen. It is the one thing that is removed from the conflict.
In the midst of the long tragedy that is the Yemen War, Sama’a has staked her claim in America. She is yet one more voice that is directing others to understand her native land, both in regards to the current political events and in more sanguine ways that recall Yemen’s wondrous artistic past and present.
In addition to her work as director of the Yemeni Cultural Institute for Heritage and the Arts, Sama’a Al-Hamdani is a visiting fellow at the Center for Contemporary Arab Studies at Georgetown University. You can follow her @Yemeniaty on Twitter.