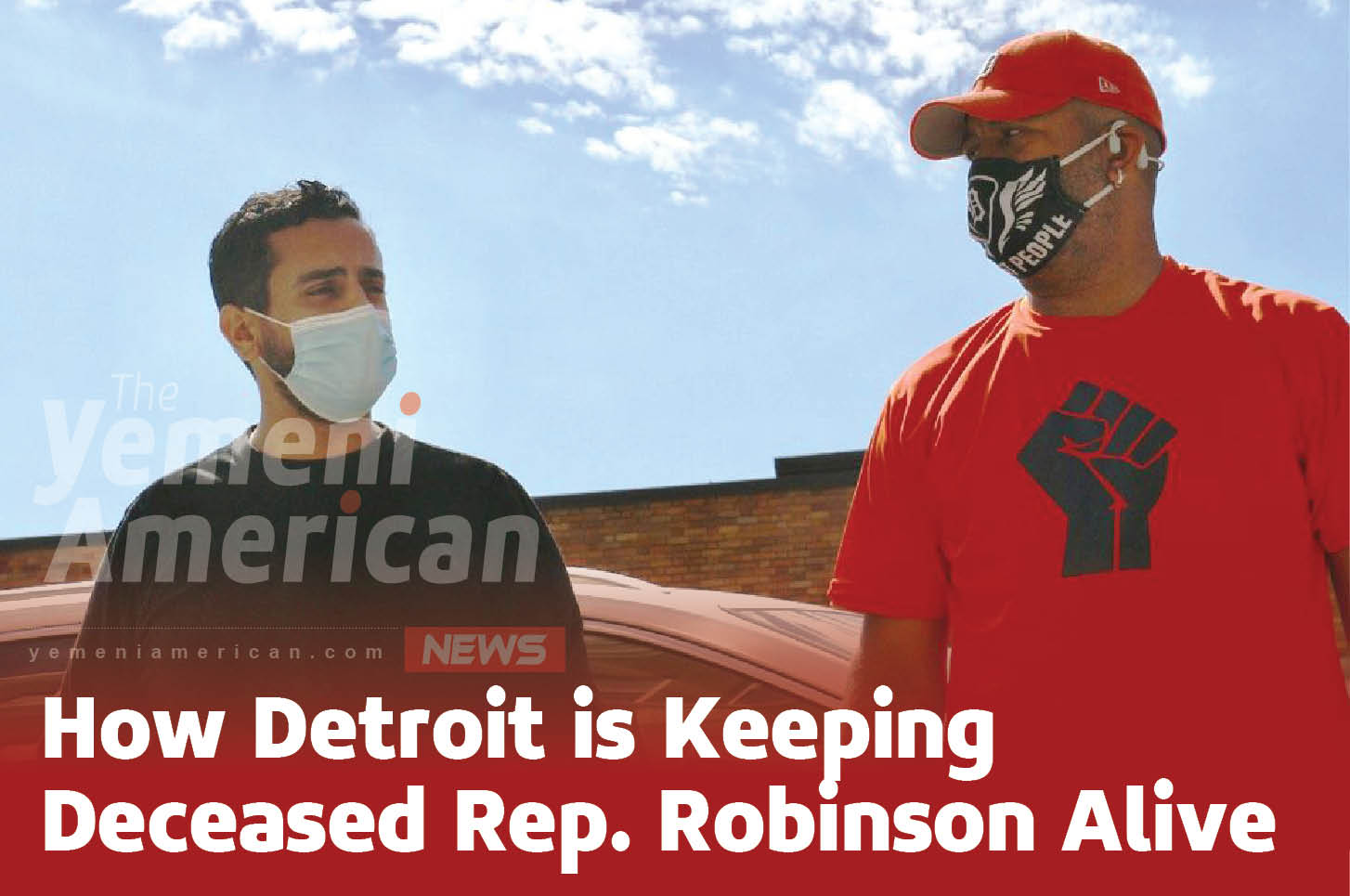 Detroit, Mich. – Gathering at Piquette Square for a day of service, Detroit’s elected officials stood in front of the entrance for the apartment complex. They talked about the role that Isaac Robinson had on their life and work in public service in the late morning sun.

Big names in Detroit politics shared stories of the larger-than-life lawmaker. Rep. Tyrone Carter talked about the man who graduated top of his class at Northwestern Law School only to later debate bills on the legislative floor in sweatpants and sneakers. Former EMU Student President Jelani McGadney talked about Rep. Robinson’s trust and passion to a fault.

“Isaac was a representative who was full of passion, full of humor, and was very dedicated to serving his community,” said Jelani McGadney. “He’s somebody that never ever forgot the district that sent him to Lansing, and he wouldn’t let anybody forget it.”

They stood together waiting for his replacement, presumptive nominee for the Democratic Party Abraham Aiyash, before the real work began. Coming up the sidewalk, Aiyash pulled open the box of literature for the census and after some quick group photos, got to work showing everyone how to canvas for the 2020 Census.

Groups of four each took a few blocks in some of the least responsive neighborhoods of Detroit. After getting their orders from Aiyash, the canvassers jumped into their cars and onto the pavement near Detroit’s border with Highland Park. On one route, people yelled through their door that they had already filled out the census.

Between Houses, Rep. Tyrone Carter lifted the side of his polo shirt to show off a firearm tucked into his waistband. “Just to let you guys know, we’ll be alright if anything happens,” Rep. Carter said.

Between the doors, one of the volunteers trained another on how to knock, before letting him go knock on some on his own.

It was a day for Rep. Isaac Robinson. In Lansing, Governor Whitmer ordered the flags in Lansing to be lowered in honor of the lawmaker. On the day of service, Robinson would have turned 45 years old. When he died on Mar. 29, national reports talked about his dedication to the district.

“Rep. Isaac Robinson had a huge heart, a quick wit and a genuine passion for the people,” Gov. Whitmer said at Robinson’s passing. “He was a fierce advocate for Detroiters and people across Southeast Michigan. He dedicated his career to ensuring justice and security for those he served, and the impact he had on his community will continue to be felt for years to come.”

After the canvassing, volunteers and elected officials went to one of the parks in Rep. Robinson’s District in order to dance and enjoy food. State Senator Marshall Bullock II looked at the people dancing to the music in the park. “You know Isaac was a ballroom dancer, right?” he said. When they would go to events together, he talked about how no one left without going for a quick dance with Robinson.

A reliably democratic majority voted Abraham Aiyash to be the next person to represent Isaac Robinson’s District. His plan now is to try and introduce some of the bills that were left on Robinson’s desk before his passing that dealt with Criminal Justice Reform and Election Protection.

“You know, Isaac, I think set a standard of what leadership looks like in House District 4,” Aiyash said. “He was always there for seniors. He was always present. And, you know, I want to keep that spirit of his service around through my leadership.”

For this and the next term, Abraham Aiyash will be representing District 4. But for the years to come, District 4 will miss its representative.